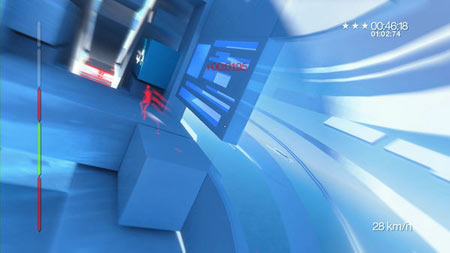 DICE and EA have announced the all new downloadable time trial map pack for Mirror’s Edge, while also announcing the video game’s shipping dates for PC. The DLC will be available for Xbox 36, PS3 and PC in late January.

PC version of the game will be shipping in North America on January 13 and rest of the globe will receive the game on January 16, 2009.

The new DLC pack will challenge players to accomplish nine races across seven “all-new totally redesigned” Time Trial maps with fastest times possible. The best time can be also uploaded to the Mirror’s Edge leaderboards. The DLC boasts of testing true agility without the involving cops, guns or city.

“The freedom of movement and control in first person has been the most popular aspect of Mirror’s Edge so we decided to distil these down to their purest form for this map pack,” says Owen O’Brien, Senior Producer, DICE. “We deliberately chose a more abstract aesthetic that is still within our distinctive art style and then focused on flow and gameplay to create an experience and challenge very different from the main game.”

The Mirror’s Edge DLC pack will be available for $10 or 800 Microsoft points while an added bonus for PS3 owners is being offered, which includes an additional downloadable map for free.