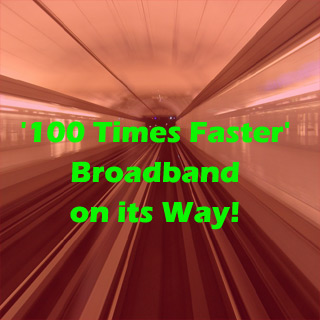 A new device has been developed by a team of scientists at the Britain-based Bangor University, which apparently promises 100 times faster broadband speeds. And what’s even more exciting is that we may get the blazing speed at 75% cheaper costs.

The experts at the Bangor University, working on the EU-funded Alpha project, are currently in the works of developing a prototype. A £760,000 grant from the European Union’s (EU) Alpha project was received for this initiative.

The experts claim that the new device has the ability to download 15 full-length Hollywood movies in just a minute’s time, thereby making broadband drastically speedier and cheaper for customers.

According to Tang, this device would also offer increased convenience to the aged in their homes as it will make possible applications such as tele-medicine to thrive.

The prototype is complete, and in appearance will pretty much resemble a DVD player. It will be placed between the broadband outlet and computer.
No revelations on the cost of the prospective product have been made as of now.