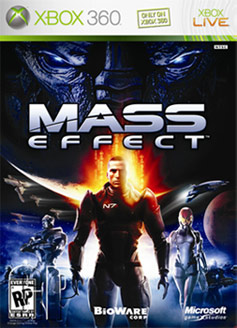 Mass Effect for the Xbox 360 presents a brilliant combination of gameplay set in a deep, multi-directional story. The game is packed with realistic graphics and cinematics and is expected to offer players emotionally charged gameplay.

In fact Mass Effect is sure to be well received by the general public as it received over 50 awards including the 2007 Games Critics Awards in the Best Console Game and Best RPG categories at the E3 event that took place in July 2007.

According to Ray Muzyka, chief executive officer, BioWare Corp, “With ‘Mass Effect,’ BioWare is delivering an incredible next-gen gaming odyssey. Our fans will journey through a vast, futuristic universe as they are challenged to make impactful decisions that will determine the very fate of the galaxy.”

Greg Zeschuk is the president of Bioware Corp. He stated, “The best games bring players into an immersive, realistic world that is fun to explore from beginning to end. We’ve achieved that in ‘Mass Effect’ by putting the player at the center of a compelling, cinematic storyline full of realistic characters and hundreds of exciting locations.”

Bioware, the creators of this game are best known for well-received games such as Star Wars: Knights of the Old Republic and Jade Empire and the Neverwinter Nights Series of games.

Mass Effect for the Xbox 360 has been rated M for Mature audiences only. The game will arrive on retail shelves in North America on November 20 this year and will carry a price of $59.99.