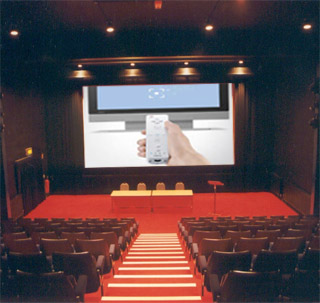 Nintendo has joined hand with communications agency CommentUK to introduce live interactive advertisements in UK cinemas as part of a campaign which is touted to be ‘an advertising first’ by CommentUK.

So what exactly will happen in this innovative advertising initiative? Read on…

During the Over forthcoming two weekends, five pairs of actors will be appearing at nine cinemas across the country to demonstrate Wii Sports.

An advert will play on screen as usual, with one actor – playing a teenager called Steve sitting amongst the audience. The second actor, playing the role of his mother Elsa, will walk into the auditorium finding her son.

The advert will then be paused and the house lights will come up as Elsa calls out for Steve. She will challenge him to a Wii tennis rematch in front of the audience. They will play the game live on the big screen to demonstrate ‘just how exciting and easy it is to play’, said CommentUK MD of Dean McKain.

“We expect to reach thousands of cinema goers over the next two weeks,” McKain continued.

“As we know that recall rates for this type of live communication are huge – as much as 89 per cent after 4 weeks – we feel sure that the word of mouth viral effect of the activity will have a positive impact for the brand.”

The adverts are being shown as part of a deal with Carlton Screen Advertising and Picturehouse cinemas. This weekend will see them debut in venues in Clapham, Greenwich, Stratford East, Cambridge and Liverpool, while next weekend they will be shown in Edinburgh, York, Southampton and Brixton.

None can dispute that this truly is a novel advertising method. But the big question is that will the audiences enjoy it or would be rather concerned and prefer to stay engrossed in what they are originally in the cinemas for (watching the film of course…well, what else did you think naughty heads). Secondly, tennis is surely the best and most universal off the lot in the Wii Sports title, but Nintendo and CommentUK could have possibly tried other games such as golf or may be boxing too, or is it that boxing gets way too violent?