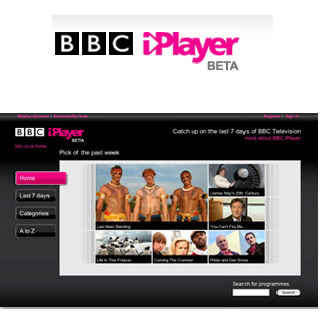 Around a month ago we had reported that BBC was in the works of launching its on-demand Web TV service called ‘iPlayer’ on July 27th, and it has indeed kept its promise. Yesterday, which was the 27th day of the 7th month of the year, BBC announced the launch of its highly-awaited iPlayer. With this new online service, british users will be able to download a big portion of the broadcaster’s programming from last week.

The iPlayer will provide around 70% of BBC’s output, a total of 400 hours of programming that includes episodes of series like ‘Doctor Who’ and ‘EastEnders’ and ‘Planet Earth’.

It’s important to note that this innovative service is only available to audiences residing in the UK and is compatible only with Windows XP PCs. The iPlayer does not allow users to permanently store programs as they will be automatically deleted after viewing or after 30 days. Copyright protection software will prevent the copying of shows.

Although not available right away, the network does intend to in the long run make available versions compatible with Vista and Macintosh. Other distribution agreements are in talks with MSN, telegraph.co.uk, AOL, Tiscali, Yahoo!, MySpace, Blinkx and Bebo.

Ashley Highfield, the BBC’s director of future media and technology said, “Our vision is for BBC iPlayer to become a universal service available not just over the Internet, but also on cable and other TV platforms, and eventually on mobiles and smart handheld devices.”

Currently, the BBC iPlayer is in its beta stage and will most probably launch by 2007-end.