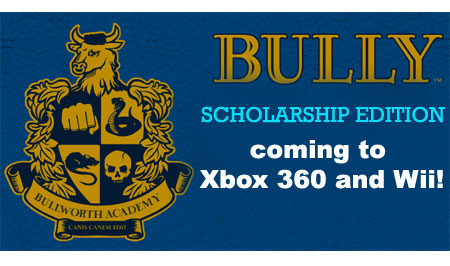 Rockstar Games has announced that Bully: Scholarship Edition is on its way to hit the Xbox 360 and Wii gaming consoles by Winter 2007.

The genre-crossing action game Bully: Scholarship Edition was initially launched on PS2, and the latest Xbox 360 and Wii versions keep up the wit and intense gameplay and have further on packed in additional new content.

Both the Wii and Xbox 360 versions will retain the wit and deep gameplay of the previously released PlayStation 2 computer entertainment system title and will boast additional new content. Bully: Scholarship Edition is set in the fictional New England boarding school of Bullworth Academy, and narrates the story of 15-year-old Jimmy Hopkins as he experiences the various vicissitudes of adjusting to a new school. It captures the amusement and awkwardness of adolescence perfectly.

So this winter be prepared to come and discover the joy, glee, and agony of youth with Jimmy Hopkins and Bully: Scholarship Edition.