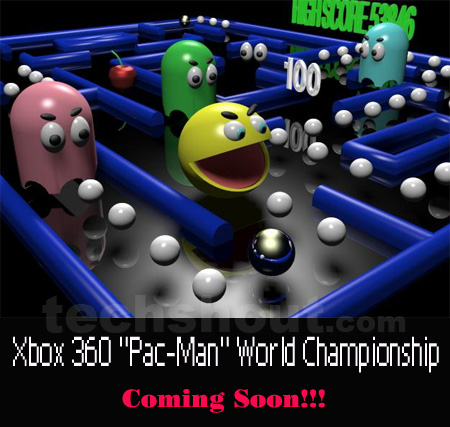 Launched in 1980 in Japan and in 1981 around the world, none can dispute the fact that Pac-Man is of the world’s most beloved video games of all time. And from 25th April to 9th May, fans of this phenomenally successful video game will compete on the classic arcade game via Xbox LIVE Arcade on the Xbox 360 video game and entertainment system, evolving “Pac-Man” gameplay from the local pizza parlours and arcades of the ’80s to the Xbox 360 and its online gaming community with more than 6 million members. The top finalists from participating countries worldwide will be flown to New York City for the finals on 5th June, with the winner being crowned the Xbox 360 “Pac-Man” World Champion by Toru Iwatani, the creator of “Pac-Man.”

Speaking on this, Toru Iwatani, creator of “Pac-Man” and currently a professor at Tokyo Polytechnic University said, “NAMCO BANDAI Games and I are proud to partner with Microsoft on the Xbox 360 ‘Pac-Man’ World Championship, which celebrates how popular ‘Pac-Man’ remains to this day.” Iwatani added, “The success of “Pac-Man” stems from its fun gameplay and host of characters that have been enjoyed by families for generations. It will be exciting to see ‘Pac-Man’ fans from around the world compete on Xbox LIVE Arcade to become the first-ever ‘Pac-Man’ World Champion.”

Some details on the Xbox 360 “Pac-Man” World Championship:

The Xbox 360 “Pac-Man” World Champion is anticipated to receive worldwide acclaim from being the first-ever Xbox 360 “Pac-Man” World Champion and gain a place in gaming history. The winner of the finals will also receive other great prizes, including 26 years of free Quiznos toasted subs (one sandwich a week for 26 years, a $13,520 (U.S.) value), 100,000 Microsoft Points for games, movies and other fun content available on Xbox LIVE, and a one-of-a-kind Xbox 360 featuring a special design inspired by “Pac-Man.”

“Great food and entertainment go hand in hand, and we expect international gamers to connect with Quiznos food with the same passion that they bring to their gaming,” said Steve Provost, executive vice president and chief marketing officer for Quiznos. “The Xbox 360 ‘Pac-Man’ World Championship promises to be a milestone moment in video game history, and we’re thrilled that we can help make it into a reality.”

“‘Pac-Man’ reached an iconic status in the ’80s across multiple generations and cultures, so the Xbox 360 ‘Pac-Man’ World Championship provides a great incentive for fans old and new to fall in love with the game all over again,” added Jeff Bell, corporate vice president of Global Marketing for Microsoft’s Interactive Entertainment Business. “We are thrilled to be partnering with Namco Bandai Games and our sponsor, Quiznos, to invite ‘Pac-Man’ players from around the globe to join in the fun.”