TechShout
Home Internet Atari 2600 gets Famous; makes it to Hall of Fame at Strong... 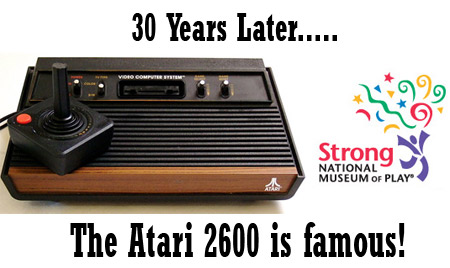 Thirty years ago, the Atari 2600 was launched only to become an instant success. It sold for $199, initially had a library of just 9 games and managed to sell 2,50,000 units within just a matter of months. Now, we have come a long way and are spoilt for choice with the next-generation consoles that offer a whole new world of a difference in terms of graphics and performance. Surely, after all these years, the Atari 2600 belongs to history.

Now, on its 30th birthday, the Atari 2600 has received a wonderful present in the form of an induction into the Strong National Museum of Play’s toy “Hall of Fame.”

The Strong National Museum of Play’s toy Hall of Fame comprises an elite rank of deserving members which include the Teddy Bear, Barbie, G.I. Joe, Frisbee, Mr. Potato Head and Play-doh, all of which have become household names and must-haves for children as well as adult collectors.

But, what sets the Atari 2600 video game console apart from the above mentioned “famous” toys is the fact that it happens to be the first electronic toy to be inducted into the Strong Museum of Play’s toy Hall of Fame.

According to Jon-Paul Dyson, a curator for electronic games at the museum, “The 2600 had better games, more colorful graphics, and sharper sound than the systems that preceded it. And what games! ‘Combat’, ‘Space Invaders,’ ‘Pac Man,’ ‘Frogger,’ and countless others mesmerized an entire generation and made video games a part of everyday play in the home. The Atari 2600 was a true game-changing toy.”

Further, museum curator Patricia Hogan went on to explain that “it may look primitive compared to the advanced video game systems available today, but it helped make these possible.”

And, it certainly is true. The Atari 2600 as well as its predecessors paved the way for present day offerings such as the Halo 3 game for the Xbox 360. It’s amazing because, thirty years ago, the world had the Atari 2600 and kids everywhere were demanding it. Now, we have innovative and highly-developed consoles such as the PlayStation 3, Wii and of course the good ol’ Xbox 360.

It certainly is a prestigious time for Atari and its 2600 video game system as this console now joins the ranks with other toys that have made an impact on the world such as the Slinky, Crayola crayons and alphabet blocks.