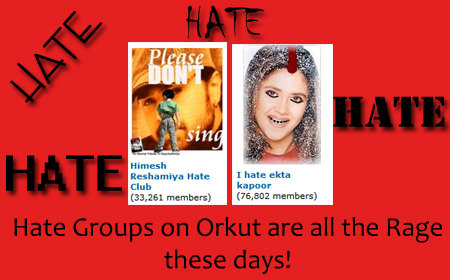 If you are one of those who absolutely detests anything beginning with ‘K’, (read: Ekta Kapoor’s serials) or perhaps you just cannot bear to hear another one of those nasal-sounding tracks of Himesh Reshamiya, then this article is meant for you.

If you hate anything and are constantly found criticizing such things in your friend circle, then you had better start up one of your own ‘Hate Circles’ on a social networking site. Otherwise, you may just find yourself hanging out alone, ranting to yourself about such menaces to society!

It has been reported that on Orkut, one of the most popular social networking sites in India, the membership of hate communities is soaring well beyond words.

For instance, it was found that a hate community against Ekta Kapoor tops the list at around 76,802 members, while Himesh Reshamiya competes for the next spot at 33,261 members. Shockingly, Shah Rukh Khan has garnered 11,179 hate fans, while the Greg Chappel hate group has 7,659 members till date. And, if you thought the Big B was everyone’s favorite, then think again, because the Amitabh Bachchan hate group has 1,410 members.

It seems there is a lot of hatred in our country because even the Father of the Nation, Mahatma Gandhi has not been left out of this. A hate community on Orkut called ‘We hate Gandhi’ has a strong membership of 6,647. Interestingly, the real person who should have such a group dedicated to him Nathuram Godse (Gandhiji’s killer) has not a single group dedicated to him.

So, what exactly makes such hate communities popular among Internet users, in particular amongst Indian users?

Psychiatrist Sameer Parekh feels that such communities have become popular as they appeal to our hatred for certain things. Very true, but why would anybody hate Mahatma Gandhi and even have the audacity to start a hate group dedicated to him?

“People have certain amount of hatred, dislikes and complexities and they get a chance to express it on such communities. But, there are very few people who give importance to such things. They reinforce your point of view and you join them without giving much thought,” explained Parekh.

It is one thing to start a community to express common dislikes about regular things in life. Such groups even have a humorous tone. But, it’s another issue altogether when communities on the Internet hurt the sentiments of others.

Social networking sites are thus coming up with new methods to prevent the abuse of communities on the Web.

A Google spokesperson said, “We take the abuse fo Orkut seriously and are constantly developing new tools to review inappropriate content on the site. Orkut users can report content to our reviewers by clicking the ‘report as bogus’ button. There are also tools for community owners to delete posts or topics, ban users and delete anonymous posts.”

“But, at the same time, we put a certain amount of trust in our users to notify us of violations. We have also introduced a priority reporting tool. It makes life easier for the police to contact us when they get concerns about content on Orkut,” the Google spokesperson added.

So, it is evident that measures ARE being taken to check the misuse of social networking sites such as Orkut, but regulating such communities is what still remains a problem. However, a group that came to my notice on Orkut entitled “We Hate Caste Feeling” is something acceptable in times like ours. After all, it’s for a good cause isn’t it?