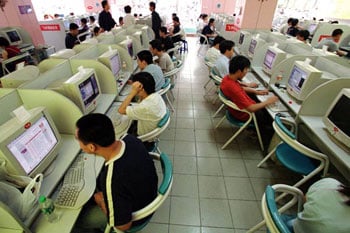 China’s internet regulators are making the rules and controls more stringent by blocking the material put up on blogs and search engine that the controllers regard as unlawful or immoral, announced the government today.

The government will step up research on monitoring technology and issue “admittance standards” for blogs, the report said, without ginving any details.

“The market cannot develop without efficient management,” said Cai, adding that the government will develop research on the concerned technology and make entrance standards for blog websites.

China keenly promotes the use of the internet for business and education; however it tries to constraint the access to obscene or subversive material by blocking it. Currently it has the world’s second-biggest population of internet users after the United States, with 111 million people online.

“We will speed up the technology development to safeguard the network management and do more researches on the internet security issues triggered by the new technologies of blogs and search engines,” said Wang Xudong, Minister of Information Industry.

He also said China will pave the way for real-name registration of phone users and ask all websites to be officially registered.

In February, China started a campaign to “purify the environment” of the internet and mobile communications, Xinhua reported.

China has 37 million Web logs, or blogs, Xinhua said, quoting a study by Beijing’s Tsinghua University. It said that number was expected to nearly double this year to 60 million.

The government has repeatedly attacked any kind of online material that may be pornographic.