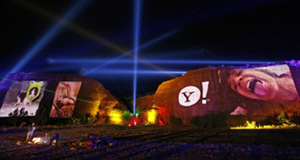 Yahoo! is showcasing select contributions from the Yahoo! Time Capsule on the canyon walls that cradle one of the world’s oldest known communities at the ancient pueblo of Jemez in New Mexico. More than fifteen hours of pictures, videos, poems and stories from one of the largest Internet time capsules in history will be projected throughout the evenings of October 25-27 to chronicle humanity across the globe. The images will also be sent into space via a digital laser light beam from the canyon.

Examples of current content in the time capsule include thoughts about ‘How to end a war one person at a time’ from Deepak Chopra, the first comic book effort from acclaimed director John Woo, as well as tributes to Steve Irwin, the recently deceased ‘Crocodile Hunter’.

“In just a few short weeks, thousands of people around the world have uploaded memories and ideas they want to preserve, creating an important anthropological collection that documents this moment in time,” said Jerry Yang, co-founder and Chief Yahoo!. “Submissions range from the intensely personal to greetings for alien life forms, including almost anything you could imagine. This project is a fascinating example of social media at its finest, highlighting the culture of generosity that exists and proliferates on the web today.”

The environmental media display at Jemez will salute the past, present and future of online and offline communities around the world. A simultaneous global web cast of the celebration will be available by searching on Yahoo! for ‘Time Capsule Celebration’. Yahoo! is also hosting a parallel three-dimensional event in the popular Second Life virtual world, where participants can watch a stream of images from the real-world event and add their own contributions to a collaborative Second Life submission for the Yahoo! Time Capsule.

Since October 10, 2006, over one million unique visitors from more than 200 countries have browsed, searched, commented or contributed to the Yahoo! Time Capsule, with people uploading more than seventy thousand multimedia submissions.