Like all wars, the campaign against junk e-mail, i.e. spam is defined along the way with victories and casualties. It’s an “ever-escalating battle,” the senior director of marketing at anti-spam company Commtouch, Rebecca Herson, told United Press International in a telephone interview.

The phenomenon of image-based spam is “the latest weapon” in a series of “all kinds of tricks” spammers employ to get their messages out, Herson said. Commtouch announced last week it had won a key battle: The company can now identify and block image-based spam. It doesn’t necessarily look like a picture. Instead, it looks more like a screenshot of text that the user might not even identify as an image, unless he tries to highlight text within the message, she explained.

Commtouch’s answer is a patented recurrent-pattern detection program, which was developed after analyzing billions of junk mail messages at “detection centers” around the world. The technology is an improvement on the current “real time black lists,” which rely on users to report spam and therefore can’t catch it all, Herson said. 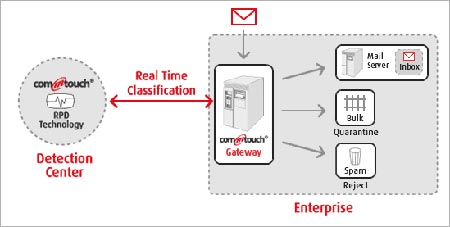 Commtouch’s Herson said spamming is on the rise. The company’s Web site features a world map with up-to-the-minute flashing red dots denoting spam outbreaks. However, Herson said, the dots are just a representative portion of the number of spamming cases the company records. “If we put up every one, the entire map would be red,” she said.

Commtouch also tracks sources of spam. As of Tuesday, nearly 4 percent of the tracked spam messages originated from addresses at Google’s Gmail. This is because Gmail is new, Herson said, and filters can’t block all Gmail messages because many are legitimate.

Besides trying to keep up with the spammers, Commtouch is moving full speed in the direction of “reputation services” .This means that IP addresses with good reputations will get through filters while users will have the option to limit the rate of, or block, messages from IP addresses with bad histories.