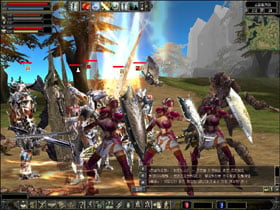 A3 was brought by Sify India in collaboration with Actoz of Korea. The game content has been customized to fit Indian tastes and sensibilities.

All the parts of the game, its graphics and every media related to A3 has undergone careful scrutiny to make sure that the A3 game is completely acceptable to an universal audience.

Its game characters are placed in a medieval setting, with exciting kingdoms, rulers, armies and the whole scenery is populated with monsters to make it more testing.

Sify will start promoting A3 online game to the gamers in India beginning from Pune. For this Sify has made an attractive A3 float which will take the game’s presence to the streets.

The A3 float will move around the city for seven days, conducting fun activities, explaining the game and distributing coupons of 2 hours free practice timeof the A3 game at Sify Gamedromes.

A3 game can be accessed from anywhere with a broadband connection as it is hosted on servers for access over the Internet. Sify will be distributing free CDs of the game client. The final gaming contest is scheduled for January 25 in Pune.

A3 is the country’s first action-packed 3D massively multiplayer online role playing game (MMORPG). It offers realistic 3D effects, dynamic environments, loads of players to compete against or make friends with, contests and events- both within the game and outside. Internet users can access and use A3 from home through a broadband connection, or visit Sify’s Gamedromes or iWays for an action-packed experience with friends said Shrikant Joshi, president (access media), Sify.