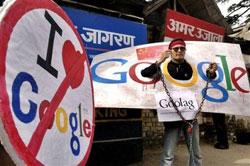 Group of angry Tibetans protested Google’s launch of a censored edition of its search engine in China, which omits anything that the Chinese government doesn’t want others to see thereby restricting free speech.

The protesters also sent out 30,000 e-mails to people across the world urging them not use Google search engine on Tuesday.

In another protest Tibetan news and views website phayul.com managed by exiled Tibetans in India shut itself down for one day, with the message: “We do not have any right to deny you our contents, but we commit this offense to help you realize a fact.”

Google Inc. launched a censored version of its search engine in China last month that removes material about human rights, Tibet and other topics sensitive to Beijing. Google defends the move as a trade-off granting Chinese greater access to other information.

Searches made on Google’s Chinese website for such sensitive topics as the Dalai Lama often show omitted sites, or direct users to Chinese government Web sites.