Internet Scammers try to Cash in on Missing Child Madeleine 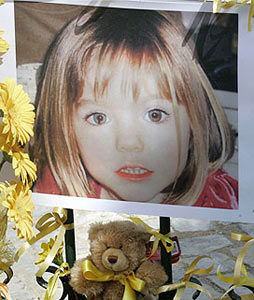 Scam artists have set up Web sites similar to an official site that was created in hopes of locating a missing 4-year-old British girl Madeleine McCann. They seem to be capitalizing on such a tragedy in an attempt to steal credit card numbers and personal details from donors.

The official Web site for Madeleine McCann, who disappeared while on holiday in southern Portugal, had received over 70 million hits in three days.

However, scam artists have set up a series of similar bogus sites looking for donations, and some even had advertisements from well-known British brands.

Madeleine’s family was obviously outraged and said, “It is a shame that people behave like this and they can exploit the generosity of the general population.”

In the bargain, donors may have unknowingly given money to the bogus Web sites simply by arriving on one and clicking on an advertising banner, as site operators receive a small fee each time an Internet user clicks on a banner.

The blonde little girl was taken from her bed at the family’s holiday apartment in Prai da Luz, on the Algarve, on May 3, while her parents were eating at a nearby restaurant.

Also, millions of people all over the world have seen a two-minute video that shosws pictures of Madeleine. This video was even show during the internationally broadcast soccer final in the Scottish city of Glasgow on Wednesday.

Further, millions more will see the DVD video entitled ‘Find Madeleine’ when it will be displayed at the Cup Final between Chelsea and Manchester United at Wembley.

This film was made by the campaign to raise awareness of Madeleine’s disappearance has already been shown at other major matches, along with appeals for her release by leading footballers such as David Beckham, Cristiano Ronaldo and John Terry.

As of now, Portuguese police are questioning Robert Murat, 1 33-year old Briton, and also a Russian computer expert, Sergey Malinka, in connection with the girl’s disappearance.

Multinational companies, including British Petroleum, Shell, Esso, Texaco and Total have launched a massive poster and text messaging campaign as millions have been poured into a fund to help the search.

Telecoms companies including Vodafone, O2 and Spain’s Telefonica are among those backing the phone text campaign.

Madeleine’s parents, Kate and Gerry McCann, have said they will stay in the Algarve resort until Madeleine is found.