Internet Outages could occur in 2010 due to Superhighway Traffic Jam, says Nemertes 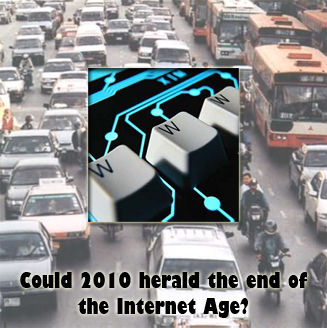 A report issued by the US firm Nemertes Research has warned that the Internet, also known as the information superhighway could just become clogged with excessive data by the year 2010. The effects of this could make life on the Internet more difficult for users.

Nemertes has explained that the reason for this could be that bandwidth usage is outpacing infrastructure build outs.

According to Mike Jude, a senior analyst with Nemertes, this could take the form of Web pages taking longer time to load and interruptions in videos that are downloaded or streamed.

“If we don’t do anything, we’re going to start looking like the dying days of dial-up access,” Jude warned.

Something that can be done to prevent this information overload on the Internet from happening involves over 100 billion dollars being invested in the global Internet infrastructure so that a level of gridlock can be prevented. This gridlock would otherwise make it almost impossible to use rich media sites like YouTube.

This issue could also be an obstacle when it comes to technical revolutions. The report added that, “The next Google, YouTube or Amazon might not arise, not because of lack of demand, but due to an inability to fulfill that demand.”

Nemertes has even estimated the investment needed to prevent the clogging of the Internet to be at something like $137 billion globally. In fact, they also said that the financial investment needed to “bridge the gap” between demand and capacity in the US alone would range from $42 billion to $55 billion or 60% more than was planned.

The report by Nemertes was partly funded by the Internet Innovation Alliance (IIA) which campaigns for universal broadband in the US.

Larry Irving, co-chairman of the IIA said, “We must take the necessary steps to build out network capacity or potentially face Internet gridlock that could wreak havoc on Internet services.”