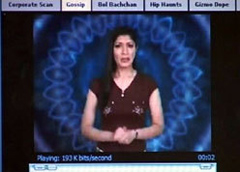 Sifymax, a web portal company has just launched the concept of Internet jockeys on their website mumbailive.in. They hope to deliver a brand new experience to users of the Internet. The web site already has gossip-based entertainment shows, Cutting with Aneesha and Fishing with Rehman, which are already a hit on the Web.

“The idea is to use net jockeys to communicate to the users. We can communicate with the readers more effectively by way of Internet jockeys as the audiences can relate to them. Otherwise, giving information only in the form of text or voice makes it boring for the viewers,” Head, Sifymax, Niyati Shah says.

Most Internet Jockeys have their own entertainment shows on the web, there are also Internet Jockeys who read out news and information related to the city as well. They also spin music on the Web.

Sifymax plans to spread out the Internet Jockey concept to 15 other cities starting Delhi, Kolkatta and Hyderabad after starting out with Bangalore and Mumbai.

So it’s high time for DJs, VJs and RJs to move over and it sure is time to welcome the Virtual jockeys, also known as Internet Jockeys. In this day and age when computers and the internet have become an indispensable part of our lives, this is a much welcomed trend brought to us by SifyMax.