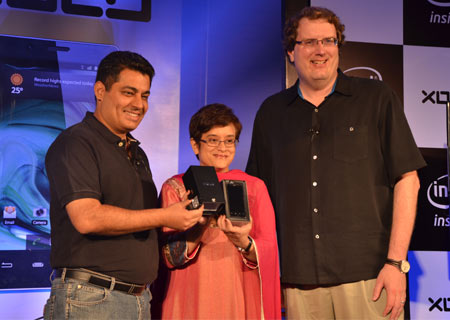 The much awaited price and availability details for the Medfield-based Intel Xolo X900 by Lava smartphone is now officially out. The device in question is expected to go up for grabs in India starting April 23, 2012, bearing a tag of approximately Rs. 22,000.

The X900 seems to have outrun the Lenovo K800 handset to obtaining the ‘first smartphone with Intel inside’ title. Powering up this 123mm x 63mm x 10.99mm device is a 1.6GHz Intel Atom processor that’s backed by the Hyper Threading technology and 1GB of RAM for quick browsing speeds and better multitasking. Accompanying these components are a 400MHz GPU and a 4.03-inch LCD that portrays a resolution of 1024 x 600 pixels.

“The first smartphone with Intel inside is now available to Indian consumers,” commented Mike Bell, Intel corporate vice president and general manager of the Mobile and Communications Group. “The boundaries of personal computing are expanding. As we enter the India market with our first smartphone from Lava, the device not only showcases the rich capabilities and user benefits of Intel computing, but also highlights the exciting possibilities of what’s still to come.” 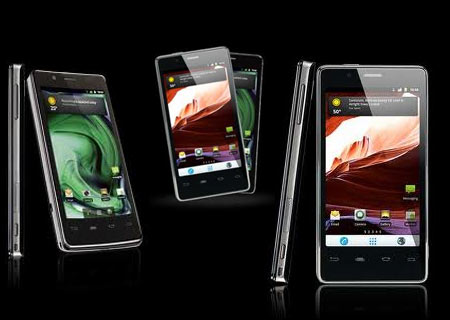 When launched, the device will initially run on the Android Gingerbread platform. However, the company plans to roll out an OTA software upgrade which brings in the Ice Cream Sandwich OS, soon after. The Wi-Fi 802.11b/g/n standard, NFC, Bluetooth, micro-USB and micro-HDMI take care of connectivity, while the 8MP camera allows users to snap up images and record videos in 1080p full HD resolution. It also employs a 1,460mAh battery that’s capable of delivering talktime of up to 7.8 hours or around 14 days of standby.

As earlier noted, the Intel Xolo X900 by Lava price amounts to Rs. 22,000. The device will be available for purchase starting April 23 through Croma and the Xolo.in website.