Manufacturers have always been inventing new categories to keep people interested. Remember how Steve Jobs got rather vague about classifying the iPad when Apple decided it was time to drop the official word about it? Intel has been talking about a ‘new breed of no-compromise computers’ dubbed Ultrabook.

The focus appears to be on extremely thin and highly responsive portable PCs squeezed into profiles thinner than 20mm. We did get a preview of a notebook almost as thin as a MacBook Air at a press event in March. Meanwhile, ‘Ivy Bridge’ is awaiting systems which will be made available in the first half of 2012. It happens to be the first high-volume chip using the company’s 22nm manufacturing technology leaning on Tri-Gate.

“Computing is taking many forms,” expressed Sean Maloney, Executive Vice President, Intel. “Technology innovation is a catalyst, and we believe the changes Intel is making to its roadmaps, together with strong industry collaboration, will bring about an exciting change in personal computing over the next few years.”

USB 3.0 and Thunderbolt technologies will also be employed to advance the PC platform in the future. ‘Haswell’ is expected to be next in line after Ivy Bridge. But that was not all Intel touched upon at the Computex 2011. The Atom processor is anticipated to progress from 32nm to 22nm to 14nm in three successive years. Cedar Trail is going to be the first netbook platform propped up on the company’s 32nm process. 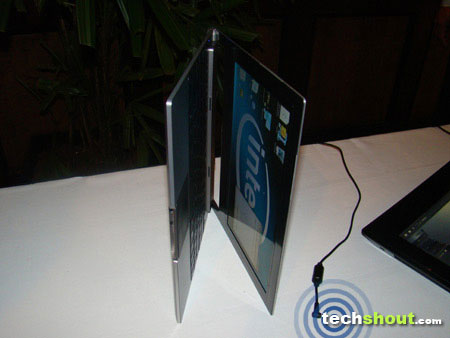 “The work Intel is doing with the Intel Atom processor roadmap, coupled with the significant changes we are making to our Intel Core processor roadmaps, will continue to enhance Intel’s ability to deliver complete hardware solutions with a choice of software platforms across a full spectrum of computing – from back-end servers that power the cloud to the billions of devices that access the cloud,” added Maloney.

Maloney even elaborated on the 32nm ‘Medfield’ platform for smartphones and slates. It was demoed running Google Android 3.0 Honeycomb at the event. The first half of 2012 should see sub-9mm designs that weigh less than 1.5 pounds for tablet constructs. Then there was the ‘Cloud 2015’ vision painting the picture of interoperable ‘federated’ clouds permitting enterprises to share data securely across public and private clouds, ‘automated’ networks and ‘device-aware’ clouds.

Devices embedding the second generation Intel Core processors will be stuck with tags reading less than $1,000. Asus, for one will have the UX21 Ultrabook out by this holiday season.