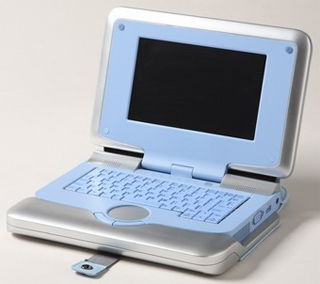 Chip maker is all set to firm its already strong grip in the Indian market. The company has announced that it is in the works of bringing an array of low-cost PCs to India. The pioneering device in this move will be the Classmate PC, which has been developed specifically for educational purposes and will most probably sell for anything between Rs. 9,000 to Rs. 11,000.

Intel’s Classmate PC is basically a ground-breaking new device targeted at providing one computing solution per student in up-and-coming markets, taking advantage of the education focus to deliver a product that puts forth excellent student education in a rugged industrial design intended for children. The pilot programme to introduce the PCs was implemented in Nigeria and later in Brazil under the company’s World Ahead project.

But don’t get ready to hit the store right now. You have to perhaps wait a whole one year more to get your hands on the PC, as its most probably not going to ship before the end of 2007.

Whilst speaking about the journey of the Classmate PC, an Intel official stated that in June 2006, 60 Classmate PCs were brought to India for pilot testing. Another 100 Classmate PCs will be shipped by the end of 2007.

“The first pilot test was done at Delhi Public School, Vasundhara, in December 2006. Now, we are planning to have another pilot test at Navodaya Vidhalaya,” the company official said.

The forthcoming Classmate PC is based on Intel’s 900MHz Celeron-M processor which can be used by the school children. A flash disk memory replaces the hard disk one in this laptop.

Now, whilst speaking about cheap PCs and laptops, the one thing that’s sure to hit any and every head is the One Laptop Per Child (OLPC) concept that is powered by AMDs Geode processor. And the OLPC laptop called Xo is sure to stand as a competition to Intel’s Classmate PC. Whilst the OLPC is estimated to be priced around $175 during its production stage, Intel’s baby will be for around $200. However the Classmate PC’s actual cost is about $285, Intel expects volume manufacturing to bring that price down to about $200.

However the Indian government has pulled out its support from the ‘One Laptop Per Child’ (OLPC) program as the Ministry of Human Resource Development felt that there are no proven benefits of providing all children with their own laptops.

Whilst speaking to ET, Intel’s brand and promotions marketing group director Rupal Shah said, “To bring classmate PC to India is a part of world ahead programme in which Intel works together with federal as well as local government to reach to the next 1-billion computer and internet users. It has been designed for use by school children in developing countries.”

Features of the Intel Classmate PC are: