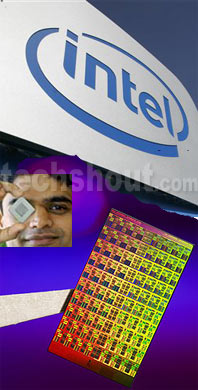 Earlier this month, we had reported on Intel’s latest “Tera Research Chip”. Well, Indian engineers at Intel’s facility in Bangalore actually played a key role in the development of this fingernail-sized chip that gives supercomputer performance, while using just 62 watts of electricity.

The Intel India Development Center (IIDC) played a key role in the development of the Tera Research Chip”, by contributing about 50 per cent of the work, in terms of logic, circuit and physical design. The rest of the research and work was done at Oregon, U.S.A, where Intel’s other research lab is located.

According to Intel, the company has been successful in developing the world’s first programmable processor from a single 80-core chip that is not much larger than the size of a fingernail, and at the same time using only 62 watts of electricity. This happens to be less than many single-core processors available these days.

According to Vasantha Erraguntla, who leads the 20-member research team at the IIDC, this happens to be the result of Intel’s “tera-scale computing” research aimed at delivering terflops (trillions of calculations per second) performance for future PCs and servers.

The Tera Research Chip features a very innovative tile design in which smaller cores are replicated as “tiles”, making it easier to design a chip with many cores. This definitely paves the way for the manufacture of multi-core processors with billions of transistors more efficiently in the future.

Besides, the teraflop chip from Intel also features a mesh-like “network-on-a-chip” architecture that allows super-high bandwidth communications between the cores and is also capable of moving terabits of data per second inside the chip.

The Intel India Development Center (IIDC) was set up in 1998 and is Intel’s largest non-manufacturing site that is located out the U.S.A.