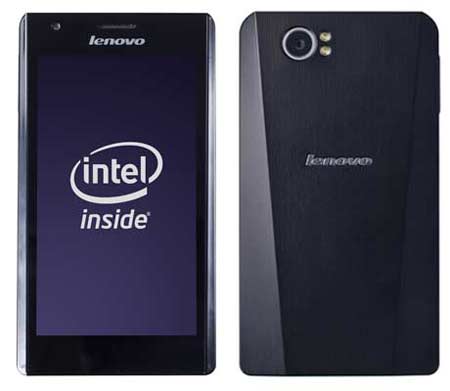 Tech buffs in China will soon get to relish Intel’s mobile technology as the Lenovo LePhone K800 has been announced for the country. Another Intel based phone, the Orange Santa Clara is coming to UK very soon, while the Xolo X900 has already been made available in India.

Although the smartphone acquires multitasking properties from the 1.6GHz Intel Atom processor, it continues to run on the Android Gingerbread OS. The Intel Hyper Threading technology teams up with 1GB RAM to allow users to launch multiple applications at the same time. Besides a 400MHz GPU, this phone has been deployed with the Intel XMM 6260 platform for HSPA+ network compatibility.

“With Lenovo’s launch of LePhone K800, we have successfully realized the idea of expanding Intel’s computing strengths into the smartphone market segment in China,” commented Ian Yang, corporate vice president and president of Intel China. “Intel continues to expand its smartphone product lines and ecosystem, looking for wider spectrum of cooperation. China has become the world’s largest smartphone market as the worldwide demands continue to grow. Intel is committed to working with industry partners to collaborate and innovate to develop and bring to the world Intel-based smartphone technologies, products and application models.”

The K800 flaunts a fairly large 4.5-inch diagonal IPS multi-touch display and the rear panel is embedded with an 8MP camera. The manufacturer has also thrown in a 1.3MP front-facing imager to facilitate video conferencing on the move. Featuring 16GB onboard memory, the device boasts of wireless display technology to project movies and videos on a big screen HDTV.

The Lenovo LePhone K800 price tag reads RMB 3,299 ($524) and it will initially be made available in China through Lenovo stores and other select retailers.