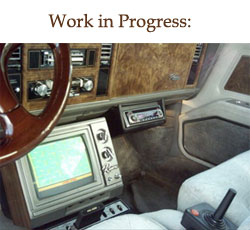 After the GPS system sat on the car dashboard and the ancient mobile phones made its beginning from the car, now Intel plans on controlling the car using a Linux car-computing system. Linux is already busy trying their hands on the systems that will be fit on to the car and will provide a futuristic drive for those who love to hit the road.

While BMW is busy working on its ‘In-car internet access’, Intel heads off with its innovative plan of developing a system which will control major functions in the car. The major functions involve in-car systems to navigation and multimedia functions. The Linux-based system will be powered by Atom processors and Moblin Operating systems.

The ’79 “Atari Package” Buick Riviera is the lucky car to get pumped in action with this new system from Intel. Apart from the usual functions, the system will also keep its gates open to accept third party applications.

The availability of the device is uncertain, but we certainly hope to see this system drive out of the concept stages to reality very soon.