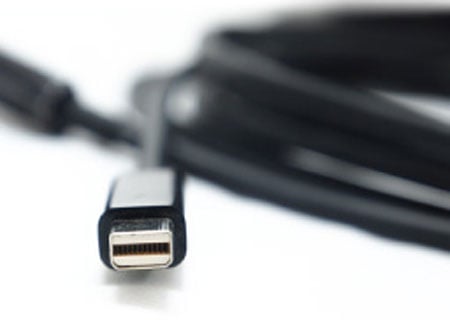 Intel has announced that the next generation of its Thunderbolt interface will be able to carry data at a speed of 20Gbps in both directions. This is double the current data rate of 10Gbps, while USB 3.0 is only capable of moving information at around 5Gbps and USB 2.0 settles for an even slower speed of 480Mbps.

The company presented an early prototype of its next Thunderbolt controller, which is codenamed Falcon Ridge at the National Association of Broadcasters (NAB) show held in Las Vegas. This controller will run at 20Gbps and the technology will allow 4K video files to be transferred and displayed at the same time. Initial production of this future generation of the technology is expected to commence before the end of the year, with a ramp up in 2014.

The semiconductor chip manufacturer based in California also introduced the Intel DSL4510 and the DSL4410 Thunderbolt controllers at the show. These add capability with DisplayPort 1.2 when they are connected to native DP displays. In addition, they are said to improve power management as well as reduce platform BOM cost.

Thunderbolt technology combines PCI Express (PCIe) and DisplayPort into a single serial signal, for transmission along one cable. It was developed by Intel in a collaborative effort with Apple, which is why it can be found on devices such as the MacBook Pro. The controllers can multiplex one or more data channels for transmission along a duplex Thunderbolt lane. Controllers at the other end then de-multiplex the data so that information can be fed into the PCIe and DisplayPort devices.

Engadget was present at this year’s NAB show and is reporting that the company now has amassed over 200 Thunderbolt licensees. The website also says that the Falcon Ridge technology will be backward-compatible with previous generation connectors and cables, and that in an on-stage demo speeds of about 1200MBps were achieved, a marked step up from the current products. And finally, the site has confirmed that new Thunderbolt host controller, apparently codenamed Redwood Ridge, will be built into Intel’s fourth-gen Core processors.

Intel hasn’t revealed when exactly we can expect the next generation of Thunderbolt products to hit the market, but with these speeds it is sure to get enthusiasts excited.