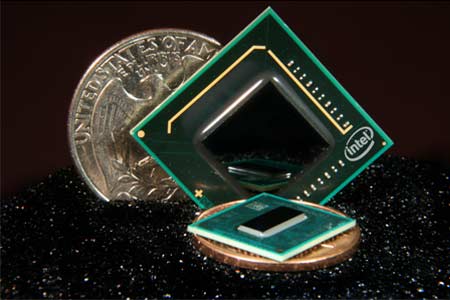 Intel celebrated the first anniversary of its Atom processor by introducing two new processors in the lineup for Mobile Internet Devices (MID). And these new chips on the block are Intel Atom Z550 and Z515.

The Moorestown platform integrates in it System on Chip (codenamed “Lincroft”) which comprises of the 45nm Intel Atom processor core, graphics, video and memory controller, and a companion input/output (I/O) hub (codenamed “Langwell”). The key feature of the platform is that it is a low-power innovation which is greater than 10x idle power reduction compared to the current Atom based platform. This platform is scheduled to get commercialized by 2010.

And about the two new chips, the Z550 claims to extend the MID devices’ performance by 2 GHz. It uses the Intel Hyperthreading technology support which allows highest performance in under 3 W power. On the other hand, the Z515 boasts of the all new Intel Burst Performance Technology (BPT). The Intel BPT backs the processor to run at 1.2 GHz in MIDs with small and sleek form factors.

Also announced were the C++ Larrabee Prototype Library and a future parallel programming solution based on “Ct” technology which will be debuting on discrete graphics products in the time frame of late 2009 and early 2010.