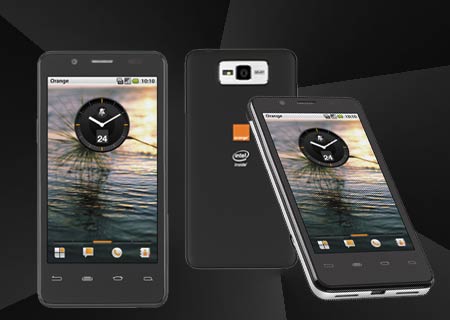 The Intel-based Orange Santa Clara smartphone that’s destined to go live in the UK is expected to be showcased this May 31, before its official launch kicks off. Unveiled back at the CES 2012, the handset’s final name is still unknown as the moniker affixed to it is said to be just a codename.

The UK-based wireless carrier recently sent out an invitation for the event. Received by Android Central, the invite states, ‘Come and find out more about Orange’s latest own-branded Android smartphone with Intel inside and have a chance to the experience the phone before its official UK launch.’ Well, this appears to be a pre-release demo, similar to what Nokia did with its PureView 808 smartphone. The device will initially run on the Android Gingerbread platform, while an update to Ice Cream Sandwich is planned soon after its launch. 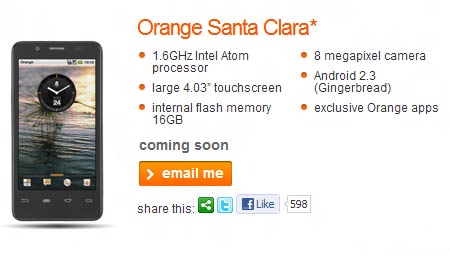 On the specifications front, the handset is fitted with an Intel Atom processor Z2460 that’s clocked at a frequency of 1.6GHz. Accompanying the CPU is support for HSPA+ wireless network connectivity brought in through the Intel XMM 6260 platform. Resting on the smartphone’s front is a multi-touch display which stretches up to 4.03 inches diagonally, while the flip side houses an 8MP camera for capturing stills and recording videos in 720p HD resolution. Also fitted within dimensions of 123mm x 9.9mm x 63mm is an internal flash storage capacity of 16GB. The device weighs approximately 117 grams and sports various Orange exclusive apps.

The Intel-based Orange Santa Clara price and availability details aren’t official as of now. However, the smartphone will be showcased in the UK on May 31, as we’ve mentioned earlier.