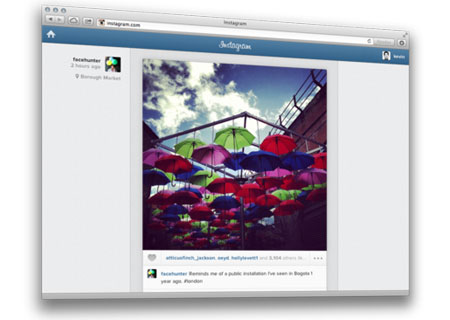 Instagram feed has come to the web and this means that users can access their subjects of interest through a desktop PC or a tablet, instead of having to browse through the collection via a mobile device. Some differences are still retained though, between the browser-based version and that which can be accessed via the mobile app, which we’ve detailed below.

The ability to access the Instagram feed on the web was announced via a post on the official blog and the move switches away from the company’s focus of building a mobile-only experience for a variety of reasons, the more pertinent of which is to make the service more accessible to the growing community. The shift to ‘desktop web’ began at the end of last year and gave users the ability to view profiles from the site.

The Internet version works in pretty much the same way the mobile version does. Once logged on to the site on a PC or tablet, users will be able to browse through the latest photos from anyone they are following, in real time. The ability to ‘like’ images is present, and users can even join in the conversations that may surround photos.

But the service still retains its core beliefs and does not allow the upload of images through the browser. And as the co-founder of Instagram, Kevin Systrom puts it, the service is about ‘producing photos on the go, in the real world, in realtime.’ The Internet version is just meant to add a layer of convenient viewing and to make browsing through a collection of images faster and simpler.

The new ability has been rolled out already and users can access it now via PC or tablet. But if they want full functionality with their accounts, that is to edit images to artistic effect and be able to upload their creations for others to see, the mobile app is still needed. There’s nothing that takes away from the core experience for which the service shot to popularity.

So now that the Instagram feed is available on the web have you tried it out? What do you think of the service’s move to allow access from the new avenue? Do you think it is a useful step forward or just something unnecessary altogether? Let us know your thoughts through the comments.