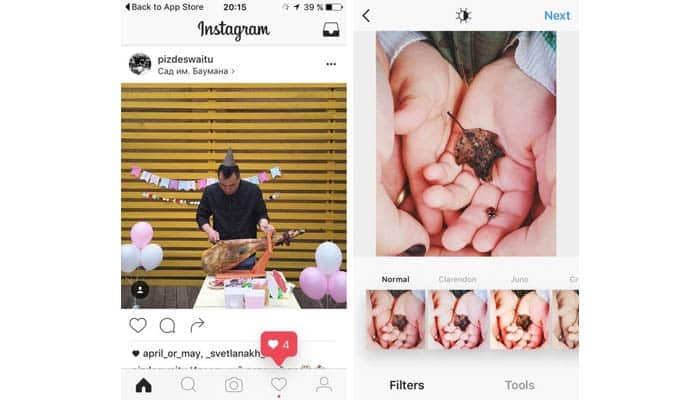 One of Instagram’s constant mainstays has been its blue and white layout, with very little changing in terms of the overall feel. This may very well not be the case in the future as a new report has revealed that the app may be heading towards a black and white design.

The monochromatic color scheme is a stark contrast to the cool blue tones of the current layout. Other than the shades, Instagram has also increased the amount of white space utilized and revamped the icons found in the app to make them flatter and more modern. For instance, the central camera symbol has gone from a circle inside a square to a logo which looks more like a camera.

Even the notifications feed has been redesigned in favor of a simple heart with a dot beneath it in place of a dialog bubble with a heart inside it. The snaps were sent in by tipster Anton Abramov to The Verge. The site went ahead and got an official confirmation from Instagram regarding the new style.

Before you start lamenting/cheering the change though, Instagram also stated that the black and white look is a design test only. The photo-sharing platform claims that it often tests new experiences with a small section of its global community. Given that the makeover is still in its early stages, there’s no telling whether it’ll eventually expand to more users or die an early death before it gets that far.

Instagram has gone through a number of upheavals recently. It finally let users post 60-second videos and plans to change-up its feeds to an algorithm-based order instead of the straightforward chronological one it’s been utilizing so far.