Instagram has now added the private messaging service called Instagram Direct that allows users to share a picture or a video with a particular group of people. It will also be possible to send a private text. Up until now, the media-sharing service only allowed its subscribers to share content publicly or limit it to their followers.

The application owned by Facebook announced this feature at an event held yesterday. Its developers describe the service as a means of visual communication for a community of photographers, but it was not possible to share private images and videos until now as they would have been visible to a whole lot of people. Thus the new feature has been launched for sharing may be an inside joke with friends or a family moment with those to whom it matters. 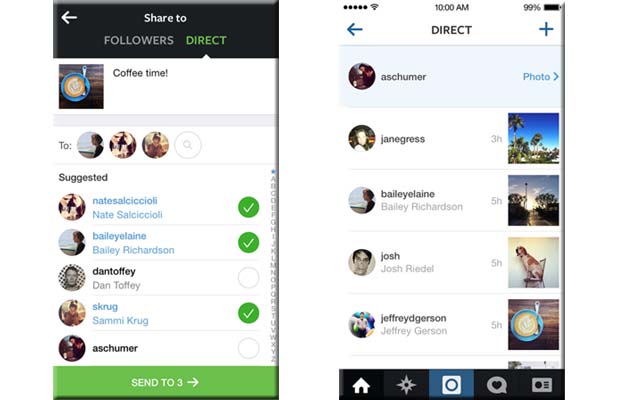 Instagram Direct works exactly like the original social network and when you open the application after updating it, you will find a new icon situated on the top right corner on the screen. This icon gives you access to your inbox that houses private messages, pictures and other content sent to you by your friends.

The procedure to send a personal message is the same as the one you adopt for sharing pictures and all with your followers. After you have selected the image you wish to share and added the required filters, you will get two options, one for ‘followers’ and another that says ‘direct.’ The Direct message can be forwarded to more than one person at a time as well.

The Instagram for Android and iOS apps have already been updated with the new feature and they are now available through the respective app stores. Windows Phone users will have to wait a little longer for it because this app is currently up for download as a beta version.