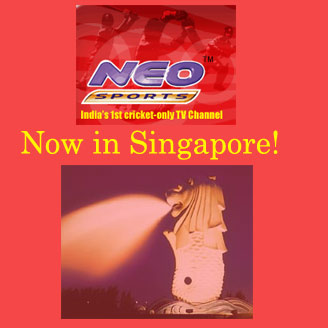 Last night’s India-Pakistan cricket match turned out to be a glorious and momentous day for us Indians. Even though there may never be another Kapil Dev or even a World Cup win as special as the one that took place in 1983, M S Dhoni made an amazing debut as captain, taking the Indian team closer to being termed as cricket legends. Now, here comes some good news for cricket fans in Singapore.

Neo Sports, the only TV channel in India dedicated solely to cricket has just announced a long term agreement with StarHub, one of the leading pay-TV providers in Singapore.

Under this agreement, from 26th September 2007 onwards the Neo Sports cricket channel will be available in Singapore with live telecasts of future matches.

Also, this deal between Neo Sports and StarHub ensures that viewers in Singapore get access to all the upcoming international as well as domestic cricket matches played in India.

Basically, StarHub will be offering Neo Sports on its digital platform as part of its newly designed Cricket Group that comprises Neo Sports and the Cricket Channel.

Prasana Krishnan, VP, Business Development, Neo Sports announced the deal saying, “We aim to reach the large Indian diaspora and the huge expatriate base in Singapore, all of whom are passionate followers of cricket. Partnering with StarHub gives us a huge advantage as they have comprehensive and unparalleled reach across all market segments in Singapore.”

Patrick Lim, StarHub’s Vice President of Cable TV Services said, “This is a great opportunity for our customers to get comprehensive access to all major cricket events across the world. We have consistently strived to deliver the best content and value to our customers and this partnership is another demonstration of this commitment. We are glad to be associated with Neo Sports, and look forward to a long and fruitful partnership. ”