An analysis conducted regarding the iPhone 5S’ prices in various countries shows that Indians pay the highest amount for the premium smartphone compared to all the nations across the world where the gadget is available. This conclusion has been drawn by relating the price in each region to the GDP per capita of that region.

The iPhone 5S starts at over half a lakh rupees and its 64GB model can set users back by as much as Rs 71,000 in India. According to the study conducted by Mobile Unlocked, the price index for the smartphone in India is 22.32 percent of the average per capita GDP. And as far as the lowest is concerned, it is Qatar where it is 0.76 percent of the GDP per capita. 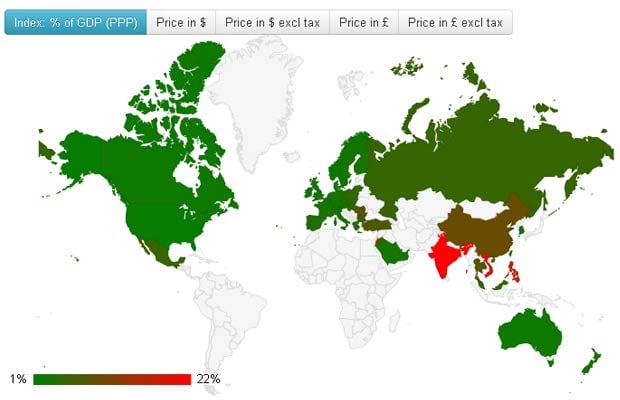 Purely on the basis of the price, the iPhone 5S is the cheapest in the US as it costs $707.41 and $649 with and without taxes, respectively. And the country where it is most expensive is Jordan where it sets you back by $1091.01 and $940.52 including and excluding taxes, respectively.

Mobile Unlocked has taken into consideration only the 16GB model of the iPhone 5S and the price for each country is taken either from the Apple site or from listed official suppliers. The website says that it will update the data as and when the smartphone is launched in other countries.