Following Amazon’s arrival in India back in June, another eReader giant, Kobo, has also made its entrance with the Touch, Glo and Aura HD devices as well as the Arc tablet. All four have already gone on sale in the country through retail outlets as well as partners which include Crossword, WHSmith and Croma.

The Kobo Touch sports a 6-inch e-ink display that has a resolution of 800 x 600 pixels. The company asserts that the device can deliver enhanced readability even in bright sunlight. It’s 10mm thick and weighs 185 grams. 2GB of flash memory is integrated, while there’s a microSD card slot onboard as well. With 32GB of external storage, you can fit in as much as 30,000 eBooks. The Touch is tagged at Rs 7,999. 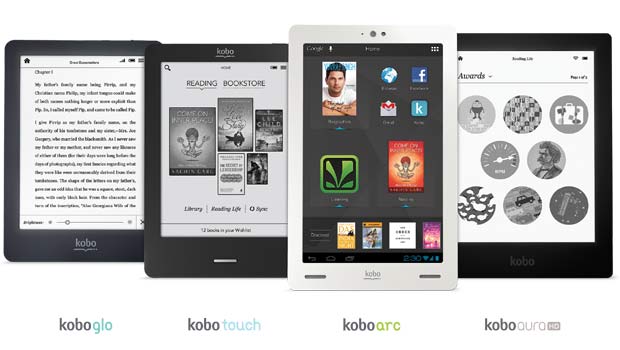 The Kobo Glo costs a bit more than the aforementioned eReader, at Rs. 10,999. It also features a 6-inch Pearl e-ink display, but the panel has anti-glare characteristics and XGA resolution. The main highlight of this device is that it lets you read in any lighting owing to the ComfortLight technology which provides backlighting. It’s powered by a 1GHz processor and is bundled with 2GB of storage and a microSD card slot.

The Aura HD is the largest in the lot with a 6.8-inch 1440 x 1080p e-ink display. This one also sports the ComfortLight technology and a 1GHz processor. Compared to the other eReaders, the device has 4GB of storage and 2 months of battery life. This piece of hardware is retailing for Rs 13,999. Last on the list is the Rs 11,999 Arc Android tablet which operates on Android 4.1. In a nutshell, this slate has a 7-inch HD screen, a 1.5GHz dual core CPU, 1GB of RAM and storage options of 16GB, 32GB or 64GB.

As a special festive offer, Kobo will be selling the Arc and Touch eReaders on discount. The former is now Rs 9,999, while the latter comes for Rs 6,999. The promotion is valid until November 3, after which both devices will retail at their original prices.