The massive Indian general elections 2014 has kicked off already and Google has come out with a Know Your Candidates tool to help people find out more about the representatives in whose favor they will be casting their votes. The Google Elections Hub for 800 million Indian citizens is not the first time the company is pitching its tent in this field.

Google first built a similarly handy tool 7 years ago when it noted a steep increase in search traffic around the time the US went to the polls. Since then, the company has extended similar services to more than 20 countries across the world. 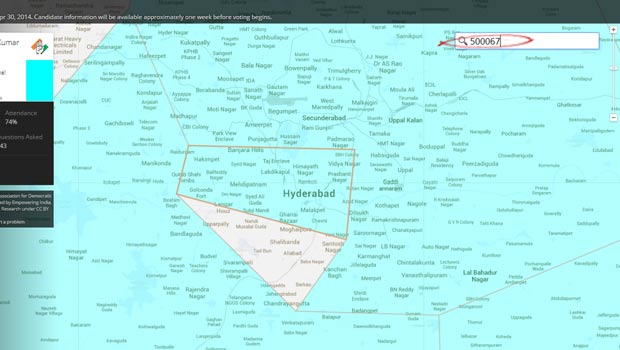 What ‘Know Your Candidates’ offers:

Know Your Candidates is a pretty useful tool which sports the Google Maps interface. You can zoom in and click on the area you live in to get the skinny on candidates in your area who are contesting the Lok Sabha 2014 elections. Or you can type the pin code of the place to which you are registered as a voter and hit enter to see the concerned representatives.

The left side of the page shows candidates’ information covering the political party they’re in, age, educational qualifications, assets declared, debates participated in, questions asked during House sittings, involvement in serious criminal cases, percentage of attendance for Parliamentary sessions and so on. Right at the bottom sits election-related content such as a Pledge to Vote campaign, news videos, Search Trends and more. 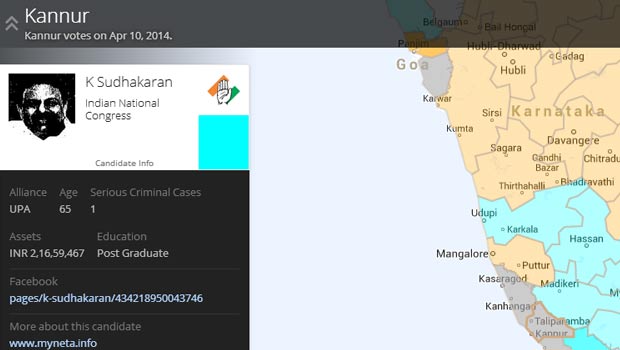 Google has gathered publicly available information from organizations such as Association for Democratic Reforms (ADR), Liberty Institute India and PRS Legislative Research for this purpose. Updating the tool with the aforementioned data is an ongoing process, but the company intends to have enough candidate information made available a week before voting begins in each constituency.

Meanwhile, Facebook has unveiled a less handy I’m a Voter button so people can declare to the world that they are being responsible citizens and going to place their vote. This along with an Election Day message will only show up to Facebook users on the day that polling is scheduled for their region. Those over 18 years and on mobile will see an alert telling them that voting has begun. 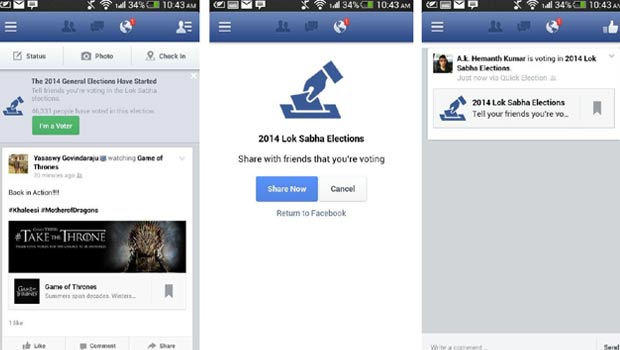 Well, if you need to be reminded to cast your vote…we’re just saying. Want to try out Google’s Know Your Candidates tool? Follow this link to the page.