The Indian government appears to have blocked access to the Internet Archive’s Wayback Machine without offering any explanation as to why. While the administration routinely blocks access to pornography and torrent sites, it’s not clear why it would block a respected institution like the Wayback Machine.

For those unfamiliar with the site, the Wayback Machine is an archiving platform that’s been around for over 20 years grabbing screenshots of millions of websites and storing them for anyone to peruse. It’s gathered up more than 302 billion pages so far and is a valuable resource for people who want to go back in time for fun or for serious investigations.

MediaNama first reported the ban on the Wayback Machine on August 8. Initially, it was observed that only certain ISPs such as Airtel and BSNL stopped people from viewing the site. If anyone tried, they would see a message stating that the requested URL had been blocked as per directions received from the Department of Telecommunications (DoT). 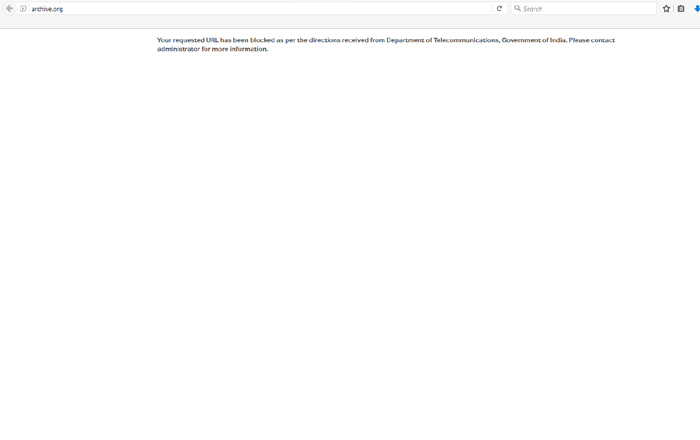 Some ISPs such as Vodafone haven’t started displaying this message yet. It was later found that ‘http://web.archive.org’ can’t be viewed, but ‘https://web.archive.org’ was accessible. The government may have directed the order at one and overlooked the other, explaining why the ban isn’t being observed nationwide.

The government is yet to publicly explain why the block was brought about in the first place. The Internet Archive itself wasn’t informed, stating that it’s tried to get in touch with the DoT and MeitY but has not gotten any response yet.

MediaNama points out that the Wayback Machine is one of the few ways to view Unique Identification Authority of India (UIDAI) documents that have been scrubbed from its site. The government had previously banned the Internet Archive in 2014 along with Vimeo and several other websites, citing concerns that they all provided access to Jihadi propaganda.