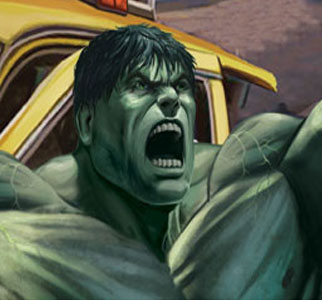 One of the most popular icons of amazing strength, The Incredible Hulk has come to the theatres, and is now also available for your mobile phones as Hands-On Mobile, Inc., one of the leading developer of mobile games and contents in the world and Marvel Entertainment, Inc., bring the super-hero via The Incredible Hulk mobile game.

So if you always wanted to battle out The Abomination black-and-blue, knock him down and other enemies by flinging cars at them, smashing walls, escape the precision missiles by dodging them then this game is for you. You get to experience all the explosions and action while searching out for a cure to the gamma radiation caused mutation that made Dr. Robert Bruce Banner – the Incredible Hulk, in this fantastic game.

David White, Chief Executive Officer, Hands-On Mobile said, “The Hulk is a character who is beloved by many, and we worked closely with Marvel to develop a mobile game that was true to his legacy.” Adding, “Just as we’ve seen consumers embrace Iron Man, we expect The Incredible Hulk to gain a similar following with an exciting mobile game to complement its film release.”

“This summer is an exciting time for Marvel, and we are excited to be working with Hands-On Mobile to create mobile games that complement our latest big screen releases including Iron Man and The Incredible Hulk,” said Simon Philips, President of Marvel International. “As we’ve already seen with the success of Iron Man, fans are eager to continue to interact with these beloved characters after they leave the movie theaters, and mobile games are a great way to do this.”

Incredible Hulk’s unique gameplay, fully interactive and destructible environments, recreating the movie scenes, is what sets it apart from other action–adventure mobile games, claim the game developers. The setting in the game is based in the hidden factories of Brazil.

Incredible Hulk, the movie hit theatres on June 13 and now the game has also been made available across selected carriers around the world.