The 3.5mm headphone jack was a standard feature in phones until 2016. So you didn’t need to look for it on the specs list while buying a smartphone. You didn’t have to purchase a Bluetooth headset along with it. Therefore you didn’t have to search for Bluetooth speaker volume booster options in Android or iOS. It’s true that 2016 was the year starting from which not just Android manufacturers, but Apple too began booting the trusty earphone port from its devices. But we’re going to concentrate on Android for now. If you want to know more about increasing the media volume on your iPhone, head over to this page of tips and tricks. Meanwhile, take a look at how to deal with the problem of your Bluetooth headset volume being too low in Android. It’s a very easy trick that has nothing to do with the volume buttons on your phone.

Please note: This method works successfully on most Android Nougat and Oreo smartphones. We most recently tried it with a Samsung Galaxy S9 Plus running on Android 8.0 and a Syska Bluetooth headset.

First of all, you have to understand that the Bluetooth device volume and system device volume are separate entities. But as soon as you connect your Bluetooth headsets to your Android devices, the media volume is controlled by the volume buttons on the wireless accessory.

Even when the volume rockers on your phone allow you to decrease or increase the audio level, the latter remains the same as that of the connected headphone. So if you need a Bluetooth speaker volume booster option, enable Developer mode on your phone.

1. To enable the Developer Options, head to Settings -> About Phone. Tap on Build Number seven times to activate it. If you can’t find the latter option, simply look for Build Number in the search box that appears at the top of the Settings page and carry on as mentioned.

2. Once you’ve activated the Developer Options, it will appear automatically within the Settings section or a sub-section. Now look for Disable Absolute Volume in the Networking section, or find it through the search bar. Next, click on its toggle button. 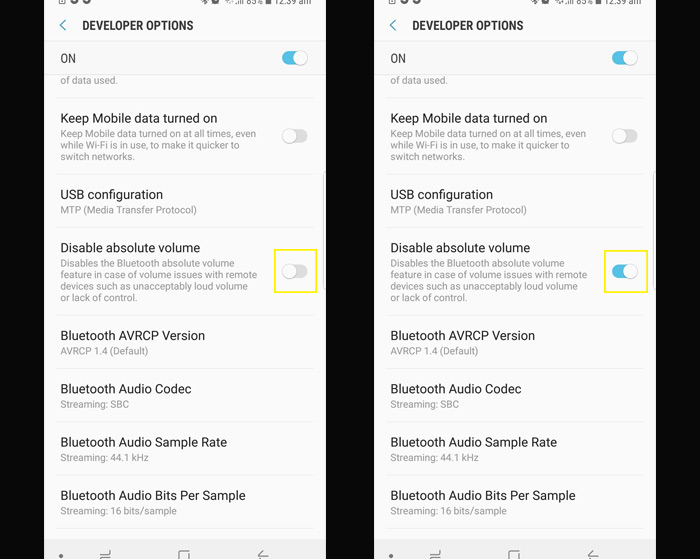 Since most of us judge the audio quality of a Bluetooth headset by the level of sound output it can deliver (apart from the clarity), the above trick is definitely worth learning. Google Nougat introduced this merging of the volume rockers on the Bluetooth headset and the volume buttons on the Android handset. XDA Developers says that the upcoming Android P software will also remember the playback volume for individual audio devices to enhance the wireless experience. We’ll keep you posted on the developments!