One of the most stupid but useful things we do in our daily lives is send emails to ourselves in order to remember something. Inbox by Gmail wants us to stop littering our inboxes with such mails, and has hence started offering a neat new feature that lets you directly set a reminder about whatever you are trying to send yourself.

Inbox by Gmail has its own reminders section, and that’s where you’ll be able to spot your upcoming nudges. This new feature springs into action as soon as you type your own name in the ‘To’ section of a particular email. A pop-up message then arrives, letting you know that it’d be rather efficient if you set a reminder instead of mailing yourself.

You can click on this pop-up to jump directly into the section that helps you set the reminder. Such a feature is possible in the usual Gmail app for Android as well, with a little help from Google Now. However, it does not work there as yet. Perhaps it will be arriving sometime in the future. 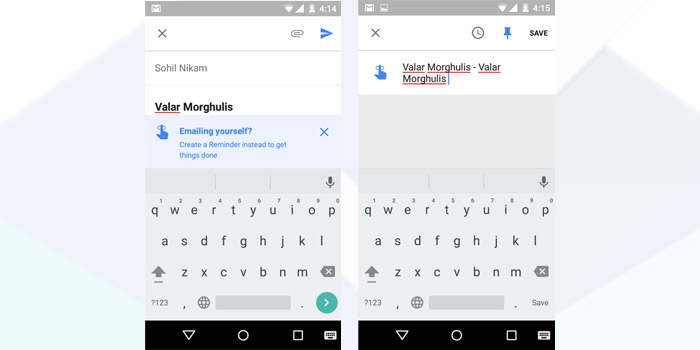 First reported by Android Police, this new trait from Inbox by Gmail is one more small but useful addition that makes this app such a wonderful utility. It was launched by Google back in October last year, but was doled out on an invite-only basis for a long time. It was only in May this year however that the company made it available to everyone with a Gmail account.

Also Read: Gmail has your back with all the SPAM that’s flying out there

Inbox by Gmail can be downloaded for Android and iOS devices, but it even works on Google Chrome as well as other browsers like Mozilla Firefox and Safari.