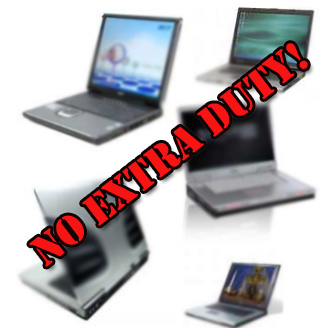 Planning on bringing down a laptop from abroad but not so keen on paying the custom duties? Well, now you can do so without having to shell out a bomb on taxes because the Supreme Court of India has ruled that the Government cannot levy an additional 7% customs duty on imported laptops.

Interestingly, additional duty is charged on desktop PCs as it is a combination of items, which when put together makes a computer.

A notebook or laptop on the other hand comes in an integrated and inseparable form and thus cannot be said to be a set of all these parts.

Bangalore-based Acer India, a well-known manufacturer of laptops had actually filed an appeal that challenged the additional levy imposed by the Government.

While dismissing a petition filed by Commissioner of Customs, a bench headed by Justice S B Sinha said that the government cannot ask IT companies to pay seven per cent additional customs duty on notebook PCs, unlike desktops, as the two items were totally different though capable of performing same or similar functions.

“We are of the opinion that a laptop or a notebook PC being an integrated item cannot be a set of a CPU with monitor, mouse and key board,” the court said.

However, the court upheld the judgment by the ‘Customs, Excise, and Services Tax Appellate Tribunal’, which said that additional levy is just to provide a level-playing field, and protect domestic manufacturers.

Opposing the department’s plea, Acer stated that laptops were not desktop computers and were known differently in the market.

For the purposes of paying additional duty, a CPU with its accessories in a set does not fall under the description of a laptop or a notebook, the company added.