How To Import Photos To iPad 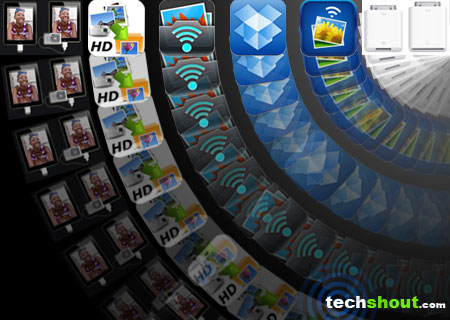 Wondering how to import photos to iPad? Well, wipe those frowns off your brow as we will guide you through the entire process. It’s not that hard to accomplish. All you need is your Apple tablet, a few minutes of your time and the appropriate adapters or software options. You would also require the device, SD card or computer which contains the snaps in question. The sleek slate from the Cupertino-based company is great for accessing various apps, viewing content, enjoying movies and even chatting with loved ones over the internet.

Generally, the 16GB, 32GB or 64GB hoarding space is cramped with loads of goodies like applications, videos, movies, eBooks, music and much more. Apart from these, a slice of space is also taken up by photos. And these days, everyone seems to be bitten by the shutterbug. Anything bearing even a slightest hint of interest gets ‘shot’ on sight. The method of capturing these pictures also varies depending on the device in hand. It could be a basic or DSLR camera, mobile phone or even your Sony PS Vita. After the picture perfect moment is stored in its virtual format, it’s time to show off your photography skills to friends and family via your iPad. Now the question is – how do we transfer these photos to the Apple slab? Read on to find out.

1 – Import Photos To iPad From Camera And SD Card: 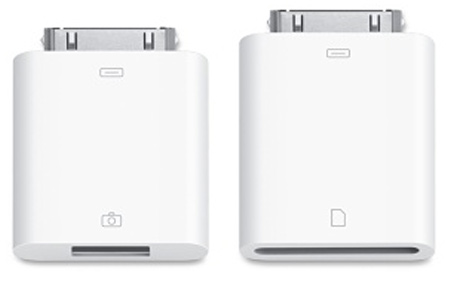 The pictures can be stored anywhere from an iPhone or digital camera to the internet or PC. If you wish to import data from an SD card or camera via the snapper’s USB cable, then you would have to purchase an Apple iPad Camera Connection kit that comes complete with 2 adapters namely, a USB camera connector and SD card reader. This bundle can be picked up at the Apple Store for just $29. Once this duo is unboxed, importing images from the respective sources becomes as easy as pie.

First, put your iPad in sleep mode and then attach the adapter of your choice. Once the SD card or camera cord is connected through the slots, the iPad will automatically open the Photos app without you having to do the same manually. You can then either opt for only select pictures via the ‘Import Selected’ button or hit the ‘Import All’ option if you want the whole bunch to be transferred to your tablet. It would then pop up with a question, asking whether you want to delete the copied data stored in your memory card or device. 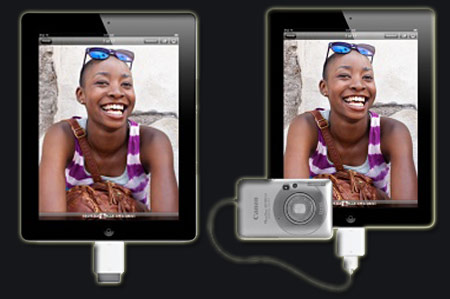 To display the imported pictures in an orderly fashion, you can further organize them into neat albums. These same snaps are also added to your PC’s photo library after you sync your iPad with the computer. The USB camera connector from the kit can even be used to import pictures from an iPhone. The content now stored in your slate can be viewed through the clear 9.7-inch multi-touch display, printed or emailed to friends and family members who aren’t present for the personal slideshow.

2 – Import Photos To iPad From Internet and PC: 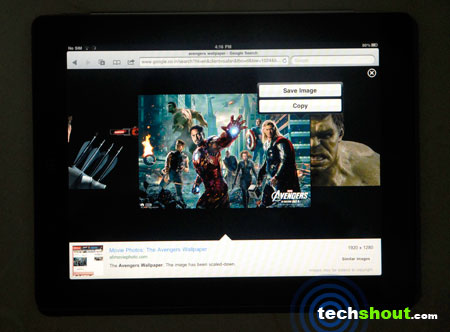 This method is fairly simple as you won’t require dongles of any sort, just a Wi-Fi or internet connection. You simply hop onto Safari and surf through the wide expanses of the web until you zero in on your desired picture. It could be slapped across your favorite website, blog or even a friend’s Facebook account. Once the picture is in sight, you must press and hold the photo until 2 options pop up namely, ‘Save Image’ and ‘Copy.’ To view that same image later, go to your ‘Photos’ option and click on the Camera Roll album. 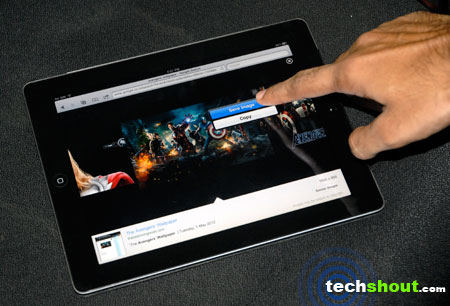 Transferring pictures from your PC or Mac can be done by simply syncing your gadget with iTunes. All you need to do is attach your iPad to your computer and select the Photos tab. Then check the Sync Photos box and opt for the folder or sub-folder that contains your snaps. You can either sync the whole folder or select pictures from the same. Once you’re satisfied with your settings, simply hit the ‘Apply’ option and complete the syncing process. Congratulations, you can now import photos to iPad from your PC.

There Are Apps for That Too: 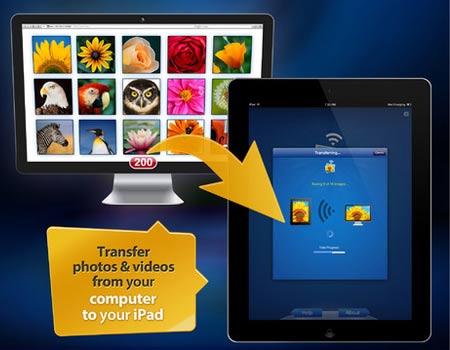 Apart from the aforementioned methods, there are a few apps strewn across the App Store that allow you to transfer pictures and content without having to dabble in connections, adapters or wires. First up is the Photo Transfer app which can be acquired by shelling out $2.99. This seems to be a good bargain if you don’t want the hassle of downloading additional software options or invoking the aid of cables. It allows you to easily upload photos from the PC to your iPad via Wi-Fi. They then get stored in the Saved Photos album on the slate. This application also enables you to exchange snaps between different iOS devices. 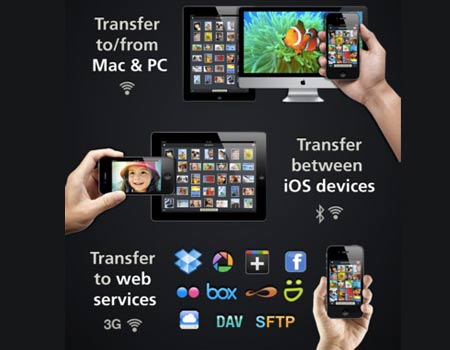 Another app that carries out the same function is PhotoSync. It wirelessly transfers your photos and videos from the PC to your device through Wi-Fi. Photo-Sort for iPad also follows a similar process and supports various formats. This duo bears a price tag that reads $1.99 each. And last but not least is the DropBox app. With this familiar entrant installed in your iPad, you’ll easily be able to sync files between computers and iOS devices. All your desired content is hoarded in your online account which can be accessed via Wi-Fi or an internet connection. Unlike the other apps mentioned here, this particular one is offered absolutely free of cost. 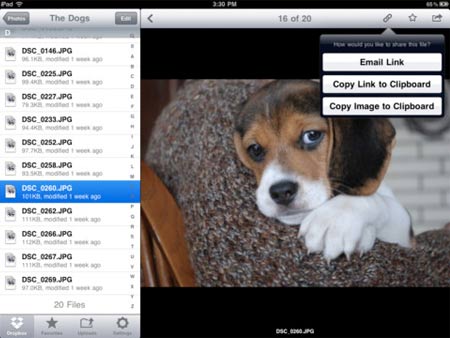 We hope our guide on how to import photos to iPad proved to be useful especially when attempting to turn your Apple slate into a portable digital picture frame. Do leave your comments telling us all about your experience, in the box below.

Among Us Character Guide: Everything You Need To Know