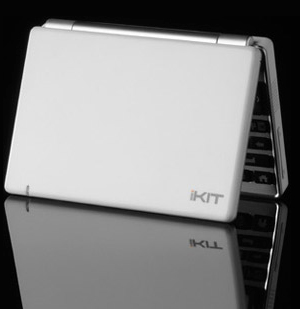 Labeled as a “pocket mobile companion” the iKIT by IMOVIO is a brand new handheld computer of sorts. It works on the Linux 2.4.19 operating system, and can serve as a convenient alternative to a laptop according to the developers.

For those who intend to use it as a mini laptop, the first hurdle could be its display. The iKIT has a small 2.8-inch TFT QVGA screen supported by a full QWERTY keyboard. In addition to this, it features 2 soft keys, volume rockers, a power on/off button, 5 quick access keys and a multi-directional key.

The memory configuration is noted to be 128MB ROM, 64MB SDRAM and a microSD card which allows for storage space of up to 8GB. Although IMOVIO packages the iKIT as an “Internet device,” this gadget only supports Wi-Fi. You will have to opt for a separate internal USB port in order to connect it to a dongle.

The iKIT packs a 1050mAh Li-ion battery which is good for roughly 250 hours of standby time. But if you’re going to use it actively, 3 hours is all you’ll be able to squeeze out of it. Apart from watching videos or listening  to music on it, you can also chat, send emails and surf the web.

Given the iKIT’s somewhat limited usability, it almost feels like this “mini PC” has been launched several years too late. It might still sell based on its novelty factor or appeal to fans of collectibles.

Interested? You will have to shell out about £99 (approximately $172) for the IMOVIO iKIT. It sports a clamshell-type form factor to protect the display from bumps and bruises.