This iMessage text bomb can crash your iPhone, iPad, Mac 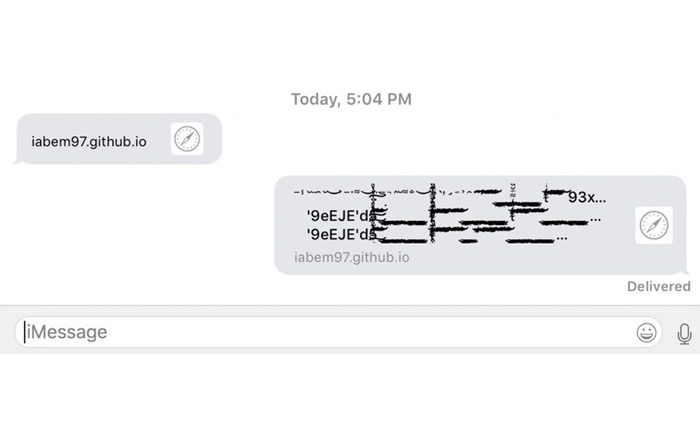 There’s an annoying new message going around which is crashing iPhones, iPads, and Macs with nothing more than a simple link. The URL leads to a Github page which in turn exploits a bug dubbed chaiOS to cause chaos.

People have reported that their iPhone ends up freezing and respringing after opening the link. Many say the Messages app becomes completely unusable through constant crashing, especially if they try to re-enter the conversation. The issue occurs even if the recipient doesn’t click on the link, since just getting it causes problems because of how iOS previews web links.

chaiOS began gaining prominence when Twitter user Abraham Masri tweeted about the bug, claiming that it would freeze the recipient’s device and possibly restart it. Another person tweeted a link to resolve the problem in the same thread, stating that it was old fix for a similar problem which worked for him.

A simpler solution would be to force quit iMessage and then delete the entire conversation. MacRumors reports that Apple has fixed chaiOS in iOS 11.2.5 beta 6 and Github has gotten rid of the malicious webpage. Still, such pranks tend to occur over and over again, so there are a few steps individuals can take to stop it from affecting their device.

One such method would be to block the domain using Parental Restrictions. Head to Settings > General > Restrictions > Websites > Limit Adult Content. Once enabled, they should enter the offending domain, in this case “GitHub.io,” to the “Never Allow” list.