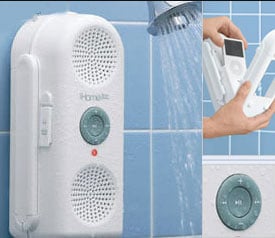 If you are one of those people who loves to pamper yourself while you enjoy the shower, then the iHome iPod Shower Station will add in additional sensuality to the shower room with a splash of music.

The waterproof device will boom its music into the shower room and also protect itself and the iPod with its waterproof shield. The speakers accept iPods as well as MP3 players. The device’s protective, water-resistant case booms music in complete stereo sound. Bathroom singers will now get company while taking a shower, but this time, the real music may mask the graying noises of the family members.

The iHome iPod Shower Station also provides the facility of attaching a CD player or iPod Shuffle through its Line-In Jack facility. Even taking control over the tracks and volume is pretty easy with its external click wheel which does not require the box to be opened. If the family members complain of loud music in the bathroom, then attach the headphone jack for private listening.

The case can be hung on the wall with its hang hook socket, which is apt for bathroom use and it can also be used in any place which involves water like beaches, swimming pool and traveling during the monsoons.

The iHome iPod Shower Station runs on 4 AA batteries or an AC adapter, at a price of $70 the device places itself for sale on online stores.