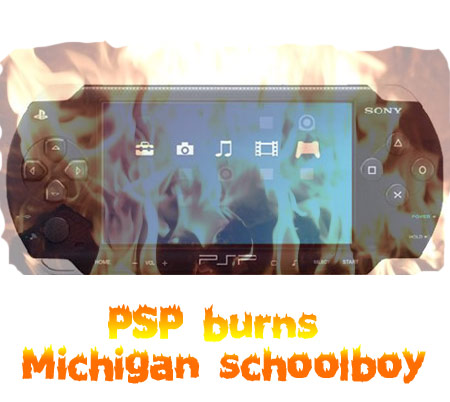 A 12-year old boy in Michigan got burnt by a Sony PSP that ignited in his pant’s pocket, reported ClickOn Detroit. The incident which occurred on Wednesday morning at Warner Middle School in Farmington Hills, fortunately has had no fatal repercussions.

According to investigators who revealed the news said that “the player overheated and exploded” without ascertaining any key reason that could have led to the accident or the reasons behind the machine’s (PSP) sudden overheating. The incident caused a hole in Harold Clay’s (the victim) pants, leaving him with minor burns on his leg.

Clay was administered treatment for second-degree burns at a hospital. Luckily, he was fit enough to resume school in the afternoon itself. But, the school was under lockdown as authorities wanted to allow the emergency personnel to get through the building and help the victim. The lockdown has been lifted now.

Apparently, the game loaded in the PSP was Burn Out, quite a pun on the situation indeed.

ClickOn Detroit quoted Sheila Clay, Harold’s mother stating, “He said it wasn’t a gradual heat. It really started heating up. He’s always been taught, burn- fire- smoke, you drop and you roll. So, he was in his band class and he dropped and rolled.”

For sure, a small tip on safety goes a long way!