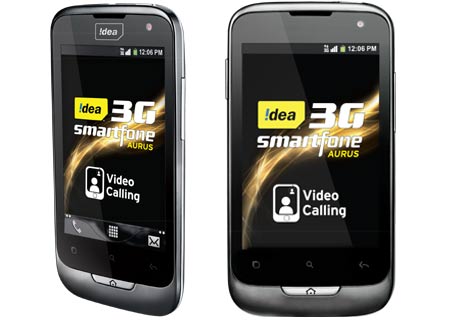 The Idea Aurus price in India has unfurled with the device being available for purchase across the country through major retail stores and the carrier’s own outlets. The company is offering a 4GB memory card and various benefits that are said to be worth Rs. 2,340, on each purchase.

The device in question appears to be the rebranded version of the One Touch 985N Blaze from Alcatel and it takes its place amongst the carrier’s 3G handset portfolio which includes the Blade, the ID 280 and the ID 918 handset that launched back in June. Powering today’s release is an 800MHz processor backed by the Android 2.3.6 OS. A 5MP camera is placed on the rear, while a secondary snapper is fixed onto the front for commencing video calls.

Sashi Shankar, Chief Marketing Officer, Idea Cellular, commented, “3G is becoming an enabler in smaller towns which don’t have good broadband access. Deep rooted mobile network and availability of affordable smartphones are making acceptance and adoption of 3G services faster in Tier 2 & 3 towns. The new Aurus will offer key 3G features like Video calling which will be a new experience for users of all age groups, especially the youth and working professionals, who want to own high-end, feature rich smartphones but find them unaffordable.”

Users can employ the 3.5-inch multi-touch screen for watching movies and playing games. In addition to cloud backup capabilities, the Idea Aurus tags along a microSD card slot supporting up to 32GB. Being dual SIM compatible users will be able to slip in 2 SIM cards for simultaneous access to 2 different networks. And since the device is 3G enabled, they’ll be able to browse the web, download music and games as well as stream videos online. These can also be done over Wi-Fi which is built-in too.

The Idea Aurus price in India amounts to Rs. 7,190. And as stated earlier, the dual SIM smartphone is available for purchase in the country.