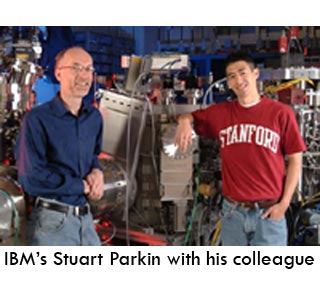 IBM Researchers have developed a new technology, termed as ‘racetrack’ memory that has a large storage capacity with better reliability, eliminating moving parts. The name explains that the ‘data races around the wire track’ inside the silicon wafer, holding more data in the same amount of space than what is possible today.

The racetrack is backed by IBM Fellow Stuart Parkin and his colleagues at the IBM Almaden Research Center in San Jose, California. It makes use of the ‘spin’ of the electron to store data, leaving behind the nanotechnology technique called ‘spintronics’.

While using flash memory or hard disk, there are many loopholes, in context to durability and rewriting data. This innovative memory is said to have the ability to rewrite it infinite number of times, with no wear and tear. It utilizes lesser power and can produce lesser heat, delivering ample amount of storage space and capacity to run on a single battery for a long time.

According to Dr. Stuart Parkin, who is a Manager of the Magnetoelectronics group at IBM, “The promise of racetrack memory — for example, the ability to carry massive amounts of information in your pocket — could unleash creativity leading to devices and applications that nobody has imagined yet.”

IBM researchers accumulated information in columns of magnetic material, or ‘racetracks,’ arranged either perpendicularly or horizontally on the surface of a silicon wafer. Racetrack memory takes advantage of the interaction of ‘spin polarized current’ with magnetization in the ‘domain walls,’ or the boundaries between magnetic regions or ‘domains’ in magnetic materials.

They have cited an example to understand the concept easily. This technology might allow a handheld device like an MP3 player to store approx. 500,000 songs or around 3,500 movies, which is 100 times more than is possible today, with far lower costs and power consumption.

In Science, researchers also mentioned that they expect the racetrack memory to move further towards the third dimension with the creation of a novel 3D racetrack memory device. This would further enhance in producing less costly and faster devices.