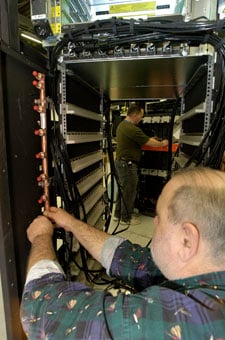 Speed, that’s what drives us and gives us excitement in our lives. We travel around in maglev trains and drive around in the cars that are advertised as the fastest. The digital world is no different. We want faster internet connections, RAMs with higher capacities and crave for microprocessors that carry out million, if not billion calculations per second.

IBM Corporation, who are probably one of the oldest in the field of technology have now started shipping high-end computers that feature a microprocessor, which carries out up to 5 billion instructions per second. The Power6 is the fastest chip on the planet.

They have outshined their rivals Intel and Sun Microsystems. IBM has introduced two high-end Power Systems models, one is the world’s fastest UNIX server called as the Power 595. The other is an exceptional water-cooled supercomputer called as the Power 575 Power6 ‘Hydro-Cluster’. It will incorporate energy-saving capabilities as well as the refined IBM virtualization technology.

Ross Mauri is the general manager of IBM Power Systems. He explained, “Today’s announcement of incredibly high-value UNIX and supercomputer solutions, coupled with last week’s announcement of the first of a new generation of servers that takes our System i clients forward on a mainstream platform, opens up a whole new world of possibilities for our Power Systems clients.”

Mauri added, “The world’s most powerful enterprise UNIX server with superior virtualization for workload balancing across UNIX, Linux and i applications and the water-cooled supercomputer represent major breakthroughs in innovation and energy efficiency for IBM clients and make the new enterprise data center a reality. Sun and HP UNIX customers just might discover the new Power Rewards program is the impetus to make the switch to the Power roadmap.”

The Power6 processors can offer two-to-three times the performance per core of comparable HP or Sun processors. The significant energy conservation design improvements will allow the Power6 to deliver double whilst using the same amount of electricity used by its antecedent. One wonders when the day will come when microprocessors with these specs would be used in home computers.