iBerry has announced the sequel to the Nuclea N1, which very predictably goes by the name of Auxus Nuclea N2 and is slated to be up for pre-booking 6 days from now. For a limited period of time, the company will give you an option to purchase the device for Rs 19,990, but its actual price has been tagged at Rs 23,990.

The iBerry device can give some tough competition to the Intex Aqua Octa which makes use of the same octa core MediaTek MT6592 processor that powers the former. 2GB of DDR3 RAM has also been added to the mix and the device makes the most of the Android Jelly Bean 4.2 which is solely responsible for its intuitive interface. 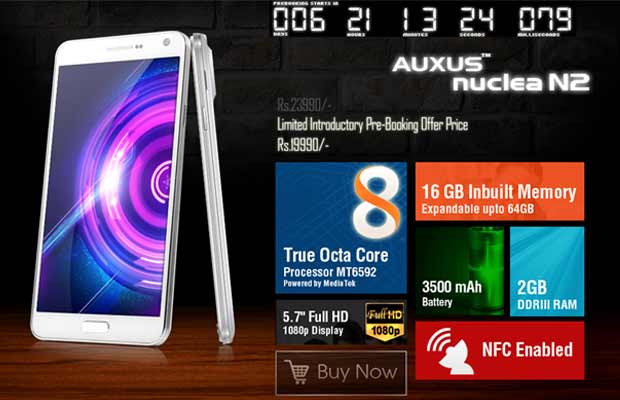 And what’s more, you get a huge 5.7-inch touchscreen which is said to be capable of rendering clear full HD visuals in 1080p resolution. You can even capture good quality pictures and images using a 13MP camera resting on the rear panel. The device’s 16GB memory can easily be expanded by up to 64GB using a microSD card and it gets fueled by a 3500mAh battery hiding under the hood.

Customers interested in the budget-friendly octa core iBerry Auxus Nuclea N2 can pre-order it through the company portal from next week onwards.