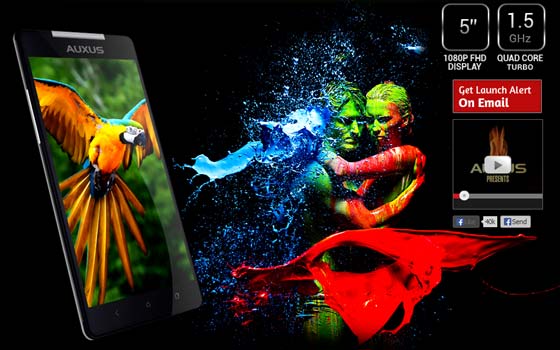 The iBerry Auxus Nuclea N1 has landed in India and the company plans on selling the device at a competitive price. The company is better known for delivering budget-friendly tablets and its latest addition aims to deliver performance-driven hardware within a smartphone form factor to the masses.

The phone will initially be available at a discounted rate of Rs 15,990 as an introductory offer, after which, the company will hike the retail amount to Rs 18,000. Joining the lineup of the few affordable smartphones that sport a 1080p touchscreen, the handset will compete against the Lemon A4 and the WickedLeak Wammy Passion Z as well as popular names such as the Canvas 4 from Micromax and the Karbonn’s Titanium S9.

The Auxus Nuclea N1 is dressed with a 5-inch AMLCD (active matrix display). It features OGS technology and proffers FHD visuals in a 16:9 aspect ratio. The choice of processor here remains the same as most manufacturers, with a MediaTek SOC doing the heavy lifting. On the bright side, the MT6589 chipset delivers a 1.5GHz clock speed in a quad core setup instead of 1.2GHz. Also, it tags along PowerVR SGX 544MP graphics running at 357MHz and 1GB of RAM.

Other components comprise of 4GB storage which is expandable up to 32GB more, a 13MP AF camera with a BSI sensor and a 2800mAh battery. No physical features such as weight and dimensions have been disclosed about the chassis. However, based on the official image, the device looks to be slim and stylish. Also, the manufacturer has left out which version of Android powers it up, but that’s likely to be Jelly Bean 4.2. Accompanying the OS are gesture control and voice unlock attributes.

Pre-orders for the Auxus Nuclea N1 are scheduled to commence from July 13 onwards. As mentioned above, it will be available at a price of Rs 15,990 and the introductory offer is valid for a period of 10 days only.