A blatant copy of the iPhone 6’s exteriors is what the design of the new iBall Cobalt Oomph 4.7D smartphone is. And just like the Apple smartphone, this new domestic handset too grabs a 4.7-inch display. It has just been found listed on the company’s website, and there is not mention of any price or release date details yet.

As you can see in the image below, everything from the front, the rear to even the sides of the smartphone is reminiscent of the iPhone 6. And we’re guessing the circular button sitting below the screen of the iBall Cobalt Oomph 4.7D is actually a home button. On an iPhone 6, that’s exactly where the fingerprint scanner can be found. The camera placement on the rear surface as well as the placement of volume and power keys on the sides is indicative of the Apple smartphone’s design. Additionally, this iBall device also comes in a tacky gold option in order to lure more people towards its fake iPhone charm. 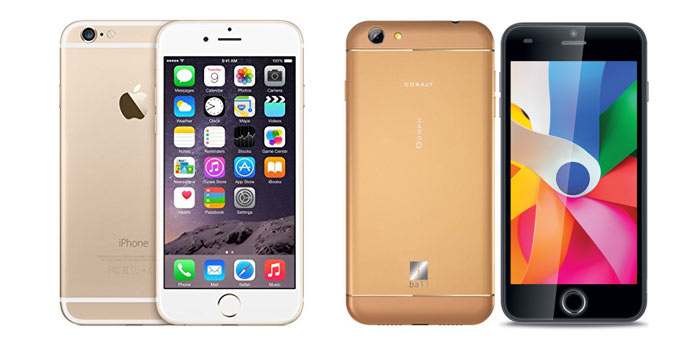 The 4.7-inch panel on the Cobalt Oomph 4.7D is 720p HD in resolution. It is accompanied on the front surface by a 5MP camera. Furthermore, an 8MP snapper with an LED flash can be found resting on its rear face.

Here’s a neat look at the specs of the iBall Cobalt Oomph 4.7D:

The combination of a quad core processor and 1GB worth of RAM powers this device from within. While Android 4.4 KitKat happens to be its OS of choice, an update to the Lollipop version has been promised for it as well.

Like we said, the iPhone 6-aping iBall Cobalt Oomph 4.7D is still to have its price and release date information revealed.