A new iBall mSLR Cobalt4 has just been unveiled for sale in India, and it has managed to distinguish itself by grabbing support for detachable lenses. Yes, this handset ships with four different lenses and despite that, it doesn’t hit your wallets hard.

The iBall mSLR Cobalt4 will set you back by Rs 8499 which is an extremely impressive retail value given its offerings. The iBall mSLR Cobalt4 carries onboard an 8MP rear camera with a dual LED flash. You can combine that with an 8X zoom lens, a 180-degreee fisheye lens, a macro lens and a 130-degree wide-angle lens.

This iBall smartphone ships with a 5-inch 540 x 960 pixel display, while it runs on a 1.4GHz octa core Cortex-A7 processor. There’s 1GB worth of RAM onboard as well, apart from 8GB of inbuilt storage which can be expanded further up to 32GB with the help of its microSD card slot. 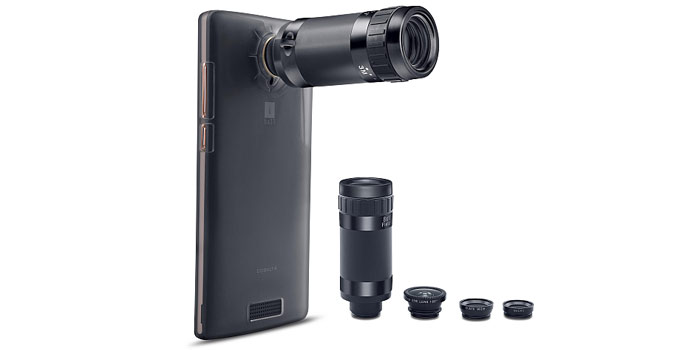 Apart from its above mentioned 8MP camera, a 3.2MP front snapper with a pixel selfie-friendly ‘soft flash’ has also made its way onto this device. And then there’s the mSLR Cobalt4’s 2000mAh battery which keeps the device going in between charges. This smartphone has for some reason been infused with the Android 4.4 KitKat OS, and there’s no word on whether or not a Lollipop update will be issued for it in the future.

Here’s a quick glance at the specs of the new iBall mSLR Cobalt4:

The new iBall mSLR Cobalt4 is slated to be made available for purchase in the coming weeks. It will of course be sold in the form of a bundle containing its four lenses at Rs 8499.